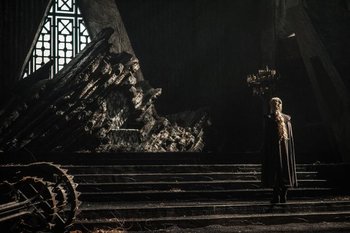 Season the Seventh begins with a cold opening at The Twins. "The Late" Walder Frey sits in his hall, which is filled with all the male members of his family: sons, grandsons, great-grandsons, bastard sons, and more. He uncharacteristically calls for a toast to them, having defeated the Tullys last season. Barmaids pass out goblets to all the men and they drink. Walder orders his child-wife not to drink, as it would be a waste of fine wine. As they drink, Lord Frey oddly does not take a gulp. Instead, he reminisces about how they destroyed the Starks, with an increasingly mocking speech reminding them that they slit the throat of a mother of five, betrayed a king who had been given guest right, and stabbed a woman pregnant with her child. But, they made one fatal mistake: they didn't kill all the Starks that night. At this, all the Frey men begin coughing and bleeding before collapsing. In less than a minute, they are all dead, an entire house wiped out in one fell swoop. Walder Frey removes his face to reveal he was actually Arya Stark, using her training of preparing faces for the Faceless Men to continue her revenge quest. As the Frey women stand in shock, Arya gives them a warning to tell others: "Winter came for House Frey."

We go through the opening credits, and for the first time ever, the revolving map stays entirely within Westeros, signifying the arrival and homecoming of a particular Westerosi exile. But more on that later!

North of the Wall, we see the Army of the Dead led by the White Walkers marching forward. Among the retinue, undead giants march with them.

Near the Wall, we see Bran Stark warg out as Meera Reed stands before the entrance to Wall. The Night's Watch led by Dolorous Edd Tollett investigates, asking them if they are Wildlings. Meera Reed reveals to Edd that they are in fact Northern nobility returning back to the Seven Kingdoms. Bran reveals to Edd that he has seen him at the Fist of the First Men and at Hardhome. The Night's Watch bring the two wandering lordlings back to the Seven Kingdoms after their quest.

At Winterfell, King Jon Snow prepares for the defense of the North, addressing the Northern lords and ladies. He explains they need dragonglass as dragonglass is one of the substances that can kill White Walkers. Jon addresses the issue of the Wall being their primary defense against the White Walkers and Tormund, realizing Jon needs the Free Folk to man Eastwatch-by-the-Sea, agrees to man the castle for him. Jon then insists (to the groans of Northern Lords) that all able young men and women will be trained to fight so as to defend against the coming battle against the White Walkers. When the issue of the castles that had belonged to the Karstarks and Umbers arises, Jon pardons and reissues the titles and castles to Ned Umber and Alys Karstark — the last members of their houses — to the initial disappointment of the Northern lords and disagreement from his sister Sansa. Sansa publicly objects, telling Jon to give the castles to families who fought for him, but Jon says that Ned Umber and Alys Karstark are not to blame for their relatives’ actions and stands by his decision. Later, in a private moment over the ramparts of Winterfell, Sansa and Jon bicker over his decision and her conduct in front of the Northern lords and ladies. Sansa tells Jon that though he is good at leading, he must be smarter than their father and brother, who made mistakes and were killed. When Jon receives a raven from Cersei Lannister demanding he recognize her as the one true ruler of the Seven Kingdoms, they discuss their enemies — Jon is focused on the Night's King while Sansa is concerned about the threat in the south, Cersei.

In The Red Keep, Cersei Lannister oversees a still-in-progress floor map of the Seven Kingdoms. Cersei is standing at the spot King's Landing is on, reviewing her strategic position. Jaime comes in and provides her the strategic overview. Essentially the Iron Throne rules over a small portion of the Seven Kingdoms, with enemies on all sides. Jaime brings up their son Tommen, but Cersei refuses to talk about him, insisting she and Jaime are the only remaining Lannisters who count. She also mentions that she's summoned allies. When a fleet of Greyjoy ships begin to arrive, Jaime realizes this potential ally is Euron Greyjoy, King of the Iron Islands, and is wary of Euron. Cersei receives Euron at court, who proposes a marriage alliance with Cersei. Jaime, however, hasn't forgotten the Greyjoy Rebellion and Euron's atrocities during the Raid at Lannisport. Euron boasts of his skills and prowess and when Cersei turns down his proposal, Euron insists that he will return with "a gift".

In The Citadel, Novice Samwell Tarly is mired in a retinue performing menial tasks. He attempts to alert his superior, Archmaester Ebrose, about the threat of the White Walkers and insists that he get access to the Restricted Section of the Citadel's Library. Ebrose discourages him. And in response Samwell Tarly steals the keys to the Library and illegally takes books from the Restricted Section.

In The Riverlands, Arya Stark runs into a small contingent of Lannister soldiers and decides to accept their invitation to have some dinner with them for a bit. A little further north of the Riverlands, in a snowbound area, the Brotherhood Without Banners and the Hound run into the same abandoned farm house that the Hound robbed when he accompanied Arya in Season Four. The Hound sees a vision in the Flames at Thoros of Myr's insistence.

Back at The Citadel, Sam, Gilly and Little Sam are in their chambers, as Sam looks at some of the stolen books. He finally finds a crucial bit of information about a mine of dragonglass beneath Dragonstone. He then sends a raven about the mine of dragonglass to Jon Snow. Later during his rounds as Novice, Samwell passes by a occupant of a cell who has greyscale. It turns out to be Ser Jorah Mormont asking for news about whether the dragon queen has arrived in Westeros.

On the shallows of the Narrow Sea, Daenerys Stormborn, her three flying children and her court (Tyrion Lannister, Varys, Grey Worm and Missandei) finally reach the shores of Dragonstone, the ancient seat of House Targaryen and the island on which she was born. Dany strides at the head of her party, briefly kneeling to touch the beach with her palm in reverence, anointing her homecoming. The exiles venture towards the abandoned castle, past the flanking dragon-head gate, up the great walkway, and into the halls; where Dany pulls down one of the last remaining banners of Stannis Baratheon, the previous occupant. Dany enters the throne room but is drawn away from the quartz chair to the Chamber of the Painted Table behind it. She trails her fingertips along the carved map of Westeros; her birthright, while Tyrion joins her. Let the final game begin.