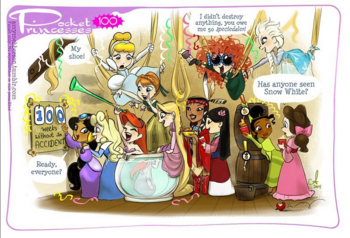 The people behind the Disney Princess franchise have (well, had) an unwritten rule that prevents the princesses from interacting with one another. Gathering the leading ladies of some of the most popular Disney Animated Canon films out there under one label is just begging for a Crossover of sorts after all.

Which brings us Pocket Princesses, a Fan Webcomic made by professional Disney artist Amy Mebberson depicting what would happen if the current and future Disney Princesses were all living under one roof. The result? Lots of hi-jinks and shenanigans as different personalities and eras mix, often in very silly ways.

The comic could be found either in this

, the comic was put on Series Hiatus due to Mebberson's heavy workload. The hiatus officially ended on November 20, 2016

, just in time for the release of Moana. On December 17, 2018, Mebberson announced

the comic would no longer be updated on Tumblr, in protest of Tumblr's purge of adult content. The archives would remain up, but new comics would be limited to Instagram and Facebook. The comic went back on hiatus on April 20, 2019, again due to Mebberson's workload. It seems to have restarted as of November 23, 2019, with the release of Frozen II. However, it now only has a dedicated Instagram account here

for new strips as Amy has also removed the Facebook page she'd had beforehand (to delete her FB presence) as well.