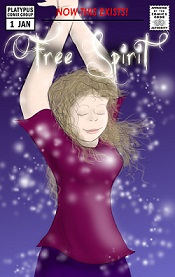 Everything is not necessarily impossible with Winnie around.
"... she's a magical character who — whoda thunk — actually makes stuff happen! Frequently! And it's not generic crap like fireballs or electricity (that makes you a bender, not a magician) — it's genuinely unpredictable phemonena."
— Peter Paltridge, "Dark TV Vault: Free Spirit

is a Platypus Comix series that began in 2014. It is a Fan Webcomic that Peter Paltridge based on the short-lived 1989 sitcom of the same name, though with a Setting Update placing it in present day.

Every 100 years, a witch must provide assistance to a mortal in need. When the time comes for the fun-loving Cute Witch Winnie Goodwin to grant a mortal's wish, she finds herself becoming a Magical Nanny and new friend to young Gene Harper and his two older siblings, Robb and Jessie. The kids' father, divorced executive Thomas Harper, remains unaware that Winnie can perform magic. Hilarity Ensues.