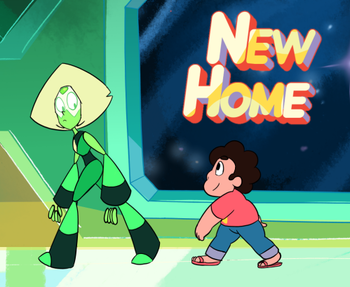 Steven Universe: New Home is a Steven Universe fancomic, diverging from canon sometime after season two's "Catch And Release".note The comic began in October 2015, around the time "Too Far'' first aired

After the Crystal Gems fail to destroy the Cluster, Yellow Diamond herself comes to Earth to retrieve it. Desperate to save Earth, Steven makes a deal with Yellow Diamond - he'll go with her to Homeworld as a new subject if she helps terminate the Cluster. With Peridot as his only friend aboard the Yellow Diamond's ship, Steven must learn how to adapt to Homeworld culture, while Peridot slowly realizes that her time on Earth has changed her more than she'd admit.

And, of course, Yellow Diamond has her own problems to deal with as well...

The comic can be found on the creator's Tumblr

The comic went on an indefinite hiatus in September 2017. On July 2018, the author confirmed on their tumblr that the comic is now cancelled, and that they would make closure post(s) of what was going to happen in the story.