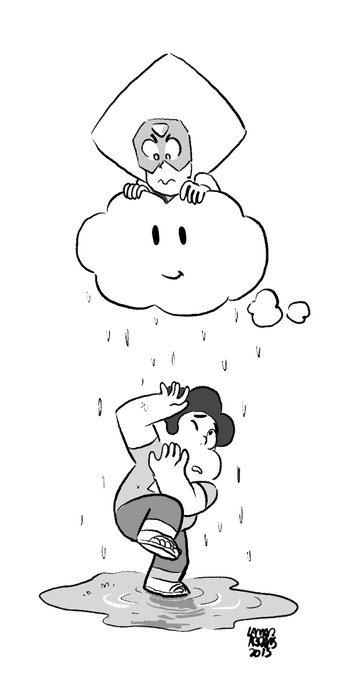 The episode begins a few days after where the previous one left off: Peridot is still holed up in the bathroom. She's still refusing to talk to the Gems. The Crystal Gems are still trying to get her to talk. And Steven is still the only one allowed in the bathroom because he actually needs to use it. They try to propose a trade, but the only thing Peridot is willing to trade for is her gear — which the Gems did away with. Peridot's hostile and insulting attitude is so annoying even calm Pearl gets irritated with her, but Garnet decides that if Peridot won't talk, they will have to investigate whatever "the Cluster" is on their own. So they leave, telling Steven he must remain behind to watch over Peridot. Garnet tells him she has one more thing to tell him.

Garnet: [makes Heart Symbol with her hands] I love you! 'Bye!

Steven decides to make himself some soup once the Gems are gone. He invites Peridot to join him since she's in there partly because she hates the Crystal Gems and doesn't want to be in their presence. But even with them gone, she stubbornly refuses to come out.

It begins to rain shortly after her refusal, and when the thunder starts, Peridot flings herself out of the bathroom in a panic, certain that it's too late — the Cluster is emerging and it's the end of the world! Steven assures her it's just thunder, which happens when it rains sometimes. Peridot is confused and bewildered, clinging to Steven. He explains to her in a simplified way about the water cycle. She doesn't quite get the metaphor about the soup being the ocean and evaporating into steam clouds which become heavy and form rain.

Peridot: So scalding liquid falls from the sky?!

Steven tries another way to show her rain is not harmful. He goes out and runs around in it, getting soaked and whooping cheerfully the whole time. Peridot watches him, torn between being wary and being confused. She ventures far enough out of the house to get her fingers wet, and even takes two whole steps out the door. Steven congratulates her about being brave enough to do so. Peridot, in turn, congratulates Steven on being more intelligent and knowledgeable than she thought he was. She decides that he is smart enough and has enough knowledge about the Earth that between the two of them they can do something about the Cluster... but they must go back to the Kindergarten, because without her limb enhancements, her fingers and screen, that's the only place she has a backup of her logs. Steven considers this and agrees, but insists she must hold his hand the entire time.

As they leave the warp pad to walk back to the platform to take them underground, Peridot remarks how badly maintained this Kindergarten is, and asks how Steven emerged. When he explains he didn't come from a Kindergarten but from his mom and dad, Peridot is confused.

Steven: That's a story I like to call "The Ballad of Rose and Greg..."

Peridot brushes him off, disinterested. They reach a panel that needs power, but Peridot can't open it on her own. Steven is able to do so easily. Peridot can't reach the control panel. Steven crouches beneath her to lift her so she can get to it, telling her that it's okay to ask for help. Once she's got the control panel lowered to her current size, she shows Steven what the Cluster really is. It's like the gem mutant experiments, only much, much bigger. An amalgam of millions of gem shards, it slumbers inside the Earth, incubating. But when it emerges, it will be so immense that it will destroy the Earth! If they can't get off planet, Peridot reasons, her knowledge of the Cluster plus Steven's knowledge of the Earth combined should be enough to stop it.

Steven assures Peridot he doesn't really know that much about the Earth; he was only able to tell her the story about the water cycle because when he was small, he too was afraid of thunder and his dad told him so he wouldn't be afraid. Peridot still doesn't get it and allows that perhaps they'll have to ask "the dad" for help, but steadfastly refuses to consider talking to the Crystal Gems. Before Steven can try to persuade her again, a throng of gem mutants appear and attack.

Steven bubbles himself and Peridot, who panics and yells at Steven to do something. Steven tells her there's not much he can do besides this. As the mutants corner them, the Crystal Gems arrive and destroy the fusion monsters. The Gems begin to scold Steven for letting Peridot take him here, but Peridot stands up for him.

Peridot: He did what he was told.

Then, swallowing her hostility and no small amount of her pride, she catches herself on being about to address Garnet, Amethyst and Pearl as "clods", backtracks, and refers to them as the Crystal Gems — and tells them she's ready to talk about the Cluster.