Recap / Steven Universe S2E23 "Back to the Barn" 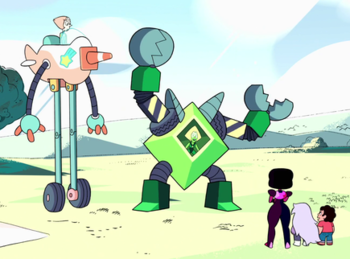 "Ladies and gentle-Gems, welcome to the first annual Robolympics!"
Peridot has decided it's time to give a presentation to the Crystal Gems, with Steven as a visual aid. She describes the Earth, using a flyswatter where a human presenter would use a laser pointer. Steven is standing inside a cardboard box with a picture of the Earth drawn on it, making sound effect noises.

Steven turns, to reveal a cross section of the earth with a gem in the middle, and Peridot continues, explaining that the Cluster is a huge artificial fusion in the center of the earth that will, when it is ready, emerge with catastrophic results, burst free and destroy the Earth. Steven's hand puppet of the Cluster irritates Peridot. Pearl and Peridot come to the same conclusion: that they must build a machine to take them to the center of the earth so they can get to the Cluster and find a way to stop it. Peridot agrees, and begins by rampaging around the house, insisting on dismantling all devices in the house: the microwave, a phone, and Steven's television.

Steven steps in and suggests that they go back to the barn where they tried to build a spaceship for Pearl. Once there, Peridot attempts to dismiss Pearl, and is nonplussed when this Pearl does not behave as she expects an obedient Pearl from Homeworld to behave. The confusion becomes hostility when Pearl insists that she is as capable as Peridot of building things. Peridot scoffs, laughs, and dismisses the very idea. Peridots are made for this sort of thing. Pearls aren't. She's a Pearl! Pearls serve; she must belong to someone. Peridot even has the nerve to grab Pearl's uniform and touch her ribbon, indicating that she's "fancy" so she must belong to someone important. When Pearl angrily insists she belongs to no one, Peridot makes matters worse by saying Pearl can belong to her for now. She goes on to explain that Pearl is just one of hundreds of Pearls like the ones back on Homeworld and just because she looks different doesn't make her any different. She's as common as they are.

Peridot: [gleefully] A Peridot with a Pearl. What would they say back on Homeworld?

Steven comes up with the solution to the problem by suggesting a giant robot competition between the two of them to see who should really be in charge of the "build the drill machine" project. Both Gems agree and race into the barn to get building. Before long, they're done. Pearl has built a dainty, long-limbed bot that spins gracefully on its wheels. Peridot has built a clunky, angular bot with claws.

The rest of the day is spent putting their bots through their paces through such challenges as:

At the end, Pearl's bot and Peridot's bot have tied based on adding up points from all categories, but Peridot will not accept it and demands a tiebreaker because she simply will not take orders from a Pearl. As a result, a fight ensues. The Peridot bot is better suited to brawling, but Peridot hurls one too many insults, and Pearl reaches out of her cockpit and punches Peridot dead in the face, much to the elation of Garnet, Amethyst and Steven, who cheer her on.

Pearl: That's right! I am a Pearl! *Hits Peridot square in the face, much to Amethyst's sheer delight* What you're saying may be true, but it doesn't matter! I'm still gonna kick your butt!

Unfortunately the boast doesn't work out like that; Peridot snatches the leg that would have kicked her butt and slams it to the ground, leaving Pearl with knockout eyes. Steven and the Crystal Gems rush to her side, help her up, and praise her for standing up to Peridot, ignoring the indignant victor. Steven proudly insists that Pearl taught herself to fight and how to build things, and works hard every day to make herself better than she already is so that makes her not only uncommon, but extremely special. Pearl blushes, and is obviously touched by the praise.

Peridot: But I won! Wh-what about the rules?
Garnet: Welcome to Earth.
Peridot: ...?

Garnet tells the others to start cleaning up from the brawl, and after a few minutes, Peridot approaches Pearl with a drill, (which she has been using upside down). She awkwardly compliments Pearl's efforts on building the robot, obviously struggling but clearly trying to make up with her, calling her a "knowledgeable technician." She suggests getting to work on the Drill, offering Pearl the hand drill. Pearl hands it back to her, right-side up.

Peridot: You know, those round appendages on your machine could be... useful for something.
Pearl: They're called wheels.

Steven, feeling playful now that the drama has passed, re-dons his "Cluster" puppet and has it attack himself as the episode irises out to its conclusion.

Steven: Looks like we're well on our way to stopping the cluster!
Puppet!Steven: You think you can stop me? (Starts to "attack" Steven)
Steven: Aah, we're doomed!