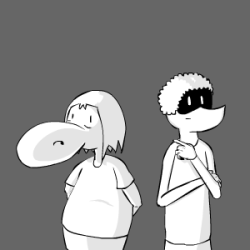 is a drama webcomic by Dinkygollier about the adventures of Jack Delitt and Mortimer Jones, in the city of Newheimburg. Both Jack and Mort are running away from serious problems in their lives, but just how long can they keep running?
Advertisement:

It began in February 2012 and updated every Monday but stopped updating in July 2019 with no explanation.