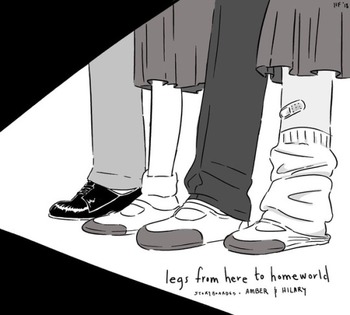 Steven is getting cuddled by Blue Diamond, whose Tears of Joy are affecting all the other Gems. Garnet is unhappy, since she knows Blue as a shatterer, but Bismuth points out that she's not going to hurt Steven. After Yellow finds that her ship is too damaged to move and gets Blue to stop crying by noting that she can't see, she asks "Pink" why "she" didn't tell them who she was at the trial. Steven explains as best he can about Pink/Rose giving up her physical form to create him, and that he doesn't have any of her memories; Yellow assumes that Pink just has amnesia. Something occurs to the two Diamonds: how did Pink survive the blast they intended to destroy every Gem on Earth?

Steven, Connie and the Crystal Gems take Blue and Yellow to Centipeetle's dropship, where they introduce them to a corrupted Gem. Blue and Yellow are shocked, and Steven demands that they try to heal her. It takes Blue, Yellow and Steven to get Centi, or rather Nephrite, to a state where she looks like herself and can talk, but when she cheerfully asks if they've avenged Pink Diamond by destroying "Rose Quartz", all three recoil and the Gem reverts back to her corrupted state. Yellow irately asks Steven, still thinking he's Pink, how many decent Gems she had them ruin. It is then suggested that perhaps all four Diamonds can reverse the corruption. Steven asks what Yellow means by that, and she snaps back that of course she means White Diamond. All of the Crystal Gems are scared except for Amethyst, who's just confused. Pearl explains to Steven that White isn't like any other Gem, including the other Diamonds. Blue and Yellow explain that White hasn't left Homeworld in eons, so Steven resolves to go there to ask for her help personally. Yellow points out that her and Blue's ships have been destroyed, but Blue wonders if Pink's ship still exists.

Steven takes everyone to Rose's dump, where he suggests they need to start searching around the large pink "pyramids" and that it might take a while. Everyone else figures out what the pyramids are long before Steven does, only realizing that they are the knees of Pink's legs-shaped ship after he's activated it and Bismuth tells him to turn around. The arrival of Pink's ship in Beach City causes people to stare, and Ronaldo to snap a photo. Connie's parents see her off, with Dr. Maheswaran noting that she can't believe she asked Connie if she's got her sword. Bismuth tells Steven she's not coming, advising him that he's going into the lions' den and he'll need to roar like them, and that someone has to look after the poofed Peridot and Lapis. Garnet assures Greg that Steven will be fine, and asks him to "water" Cat Steven. Finally, everyone is ready to go. As Steven clumsily walks the ship out into the bay for takeoff to get a running start, Pearl comments that Pink was just as ungainly while piloting it. On the journey in space, Steven wonders if he should have brought a gift for White to make a good impression, and Yellow snaps that that's not happening because turning up in Pink's ship will prove that the last six millennia are the greatest embarrassment in the history of Gem society.

Upon reaching Homeworld, Steven, Connie and the Crystal Gems are shocked by the planet's broken-apart appearance. When Pink's ship comes in for a landing, Yellow tells Steven and company to wait while she and Blue go to talk to White, and to stay onboard until they come back. But the sound of cheering is audible, and when everyone goes outside to see, they find a large crowd of Gems from all four courts celebrating the ship's arrival. Steven suggests that things will work out just fine. And then the cheering stops, and a white sphere arrives containing a monochrome Pearl in an unnatural posture with a cracked eye — White's Pearl. She speaks, with a voice unlike that of any other Pearl, stating that Pink Diamond is requested. When Yellow tries to insist on going too, the Pearl responds that only Pink Diamond's presence is required, and spirits Steven off to White Diamond's ship. Steven comes face to face with the reclusive Gem matriarch, bigger than Yellow or Blue and shining with light so bright her Gem isn't visible. White treats "Pink" dismissively, asking if "her" time away has gotten the rebellion out of her system, with Steven barely able to get a couple words in before he's sent away again, finding himself in an empty pink room with a view of White's ship and several empty bubbles.