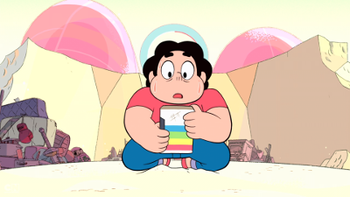 Steven, having become desperate for any clues about what his mother may have wanted him to be, is obsessively rewatching the tape Rose made for him while Lion lounges on his bed. As the big cat shows disinterest in Steven's theorizing, he eventually coughs up a large pink key that belonged to Rose. Steven tries to find out what it unlocks, trying it fruitlessly on the chest in Lion's mane (which it's far too large for), taking it into Rose's Room but getting only a lock just as illusory as everything else in there, and finally jamming it into the side of his own head, to no avail. Finally Steven persuades Lion to take him to where he got the key, and they end up in the desert. After an hours-long ride that Steven spends worrying to himself over everyone's expectations for him, they arrive at a Gem structure fronted by two large, roughly pyramidal pink structures. The door lock fits the key, and Steven goes through... to find piles of random objects in the sand, as the door lock is now pointless since the building's ceiling and walls have collapsed leaving it open to the elements. Picking up a sheathed sword to discover it's broken, Steven is direly disappointed to realize it's just a dump where Rose left her junk. As he complains about expecting to find something connected to his destiny, he kicks away a helmet to find a videotape, labelled "For Nora".

Wondering if he has a long-lost sister he never knew about, Steven asks Lion to take him to where he can get answers about the tape. Lion takes him to a hill outside Beach City that Greg uses as his "jamming hill" to compose new music. Greg is surprised to see the tape, never having expected to ever see it again, and puts it on for Steven to watch. It's almost the same as Steven's tape, and he pauses it to demand answers. Greg explains that he and Rose didn't know what sex their child was going to be, so they picked out two names, and "Nora" was what they were going to call Steven if he'd been a girl. Steven is immensely relieved when his father explains that Rose just wanted him to live his own life, and she didn't have any sort of magical Gem destiny planned out for him at all.