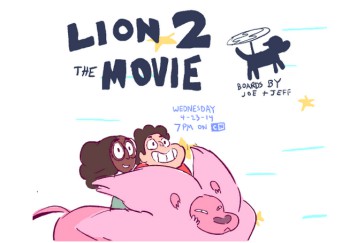 A Boy and his Lion. And Connie.
Advertisement:

The episode begins with the trailer for Dogcopter 3 in 3D, a movie about a dog who's a helicopter and a cop, and who fires missiles out of his butt. Connie and Steven are looking forward to seeing it, and show the Gems the trailer on Connie's phone. Amethyst teases the pair by turning into a duplicate of Dogcopter and tries to nick Steven and Connie's movie snacks (because Connie's parents don't allow her to eat food from the theater concessions). When Connie asks how they plan to get to the movie theater, Steven introduces her to his pet lion, Lion. Connie is amazed.

Steven commands Lion to take them to the movies. Lion takes off running with Steven and Connie on his back, but once Steven mentions Lion is not trained, nor is Steven himself; Lion turns toward the ocean. Lion can walk and run on water. His roar also opens magical portals; and having done this, he leaps through, coming to a stop in a brightly lit cavern.

Steven and Connie look around curiously and the place turns out to be a "magical Gem place". It is full of weapons and souvenirs. Connie puts Steven's hand on a pillar to activate the place, but once he touches it, they can't get him loose! It also has voice-activated training equipment which responds to Steven's voice. The pair have fun playing with the voice and gesture commands until Steven remarks, "I wanna see lots of explosions!" in reference to getting to the movie. In response to the perceived command, a drone appears. Steven takes Lion's relaxed stance as indication the drone is nothing to worry about until the training drone begins firing at them and chasing them.

When Steven calls him to help, Lion opens another portal back to Earth, in front of the movie theater. They have a moment to catch their breath, and treat their injuries. Steven feels bad for getting them into the situation, protesting that he messes up all the time and doesn't know why Connie hangs out with him. Connie says she doesn't understand why Steven, who obviously has a magical destiny, hangs out with her; she's no Dogcopter. Steven is about to try to explain, but the training device followed them back, still firing. Steven asks Lion for help. Lion produces a sword from his forehead for Steven to use. With Connie's help (courtesy of her tennis lessons), the two of them deflect the fire back on the device and destroy it.

The trio then get to go into the movie and enjoy it. Connie comments that they took some liberties transcribing from the book.

The Iris Out focuses on Lion (who is also wearing 3D glasses, in a silent Homage to the famous MGM Studios lion.)