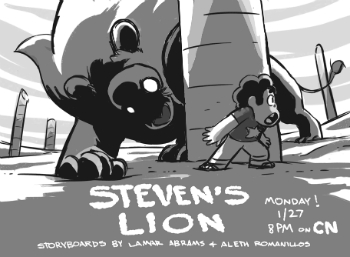 The Crystal Gems have come to a desert where pillars and other architecture are being formed at random from the sand. As they approach the source of this anomaly, Steven stays behind, only to be approached by a giant pink lion. When his back is to the wall, Steven realizes the lion is actually incredibly docile and decides to make friends with it. The gems return with Amethyst carrying the artifact that made the sand, a jeweled pillow, which Pearl warns not to let drop back on the sand. Steven gets them to understand Lion isn't a threat quickly, but they don't really think it's his friend and make him leave it behind.

Back at Steven's house, Steven and Amethyst sleep around with the pillow on top of some cushions. Steven answers a scratching sound on the door to discover Lion followed him home. Overjoyed, Steven doesn't let Lion inside because Amethyst is sleeping, but tries to play with him outside. When Lion is non-responsive, Steven takes him to the boardwalk for pizza. When the other people inside Fish Stew Pizza hear about Lion, they come out to see him, but Lion has already left by the time they get out the door.

Embarrassed, Steven walks back to his house and finds Lion scratching on the door again. Lion breaks down the door and stares at the pillow. This makes Steven think Lion was only after the pillow, so he runs out the door and tosses it in anger. It lands on the beach and reforms its defenses, alerting the Gems right before it engulfs Steven. Steven tries to climb up the sand structure to get the pillow off the sand, but tumbles on the climb up. He's saved from the fall by Lion, who Steven realizes really was on his side, and together they force their way into the sandstorm's center and grab the pillow. Although Pearl is still skeptical, Garnet nonchalantly agrees to let Lion stay.

We Iris Out over Lion's eye once Steven makes him wink.