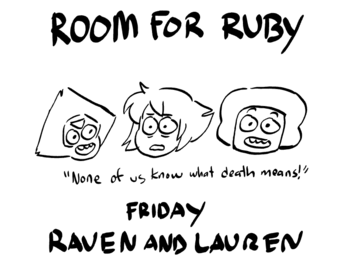 As sunset falls on Beach City, Garnet spots a falling star and is about to make a wish on it. Steven is disappointed he didn't get the chance to wish on it, so Garnet spends her wish to request another star for Steven to wish on. Lo and behold, another shooting star falls from the sky. Only this one is ... screaming all the way down.

Despite it being a crash landing, the falling star lands on the beach in front of the temple. When the smoke clears, it is discovered to be one of the Ruby Squad.

The Ruby shakes off the disorientation of fiery re-entry and crashing hard enough to make a crater. She immediately seems delighted to see Steven and Garnet. Garnet is a little weirded out since Steven told the story that one of the Ruby Squad thinks he is Rose and tried to kill him. Steven clarifies that was a different Ruby, the one he called Eyeball. The one with them now is the one Steven calls "Navy" because she has her gem in the same place he has his.

Steven is happy to see her as well, but asks her with concern if she doesn't hold a grudge against them. Navy asks why she would, and Steven reminds her that the Gems tricked the Rubies into a game of baseball. Steven wonders that Navy doesn't seem upset that Amethyst pretended to be the Jasper they admired so much, but Navy rationalizes that it made sense for them to do at the time. Steven asks if Navy isn't upset that he blasted them out the airlock and into space. Navy contends again that they were fighting. Three times asked, three times answered, Steven considers it good enough and welcomes her to Earth.

Since she's a Homeworld Gem, Steven takes her out to the barn that Lapis Lazuli and Peridot share. Peridot is enthusiastic about welcoming Navy. Lapis is dubious and suspicious about the new Gem's presence, especially when she greets every Earth experience as a delightful opportunity to learn something new and exciting. Lapis grows more and more distrustful as everything they show Ruby, she takes to and excels at pretty much instantly. Finally Lapis gets frustrated and explains that she thinks it's weird and troubling to her that Navy has caught on to Earth and made herself at home so quickly.

Navy finally decides that she's ready to join the earthbound former Homeworld Gems, but laments that their Roaming Eye spaceship isn't around since it's her Security Blanket. Steven points out that it's there, and says how cool it will be to have a pilot. Navy invites them all aboard to see the ship go through its paces.

Once they're pretty high in the air and over the sea, Navy asks Steven to press a button for her so she can show him something cool. He does, only to have a forcefield descend around Navy and the pilot seat, and the ship's airlock to open up, blowing Steven, Lapis, Peridot and Pumpkin to dangle outside the ship.

Surprised and confused, Steven calls out to Navy, asking if there's something wrong.

Navy: The only thing that's wrong is that you're...still...holding...on!

The ruse is revealed. Navy never truly wanted to come to Earth and stay, becoming another Crystal Gem. She simply wanted her ship back and revenge on Steven for blasting her and her squad into space. She executes a maneuver that drops the hangers-on into the sea, and puts the ship in hyperdrive. It immediately vanishes from the sky as it speeds away.

In the water below, Lapis Lazuli is laughing with relief that Navy wasn't such an Earth assimilation prodigy after all, but rather a liar who wanted her property back.

As they return to shore, Garnet pops the "Welcome to the Party!" balloon she had been waiting to give to Navy, and instead presents Steven with the "Sorry for your loss" one.