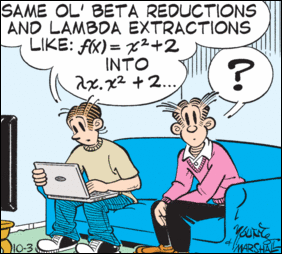 Mathematics, and in particular calculus, is treated as arcane knowledge known only to the very smart or professional mathematicians, and opaque/useless to everyone else.

In most engineering courses, differential and integral calculus is the opposite of arcane: to the contrary, it is usually only the beginning of a 5-year-long journey to much more advanced mathematical concepts such as ordinary and partial differential equations, vector calculus and complex analysis, and these topics are in turn the base of branches of science such as statistics, electromagnetism, quantum mechanics, cosmology, chemistry and signal analysis. However, Writers Cannot Do Math. Most writers are people who felt much more attracted to the warm, flexible, humane and passionate arts and humanities rather than the cold, hard, mechanical and stoic STEM. Other writers had the misfortune of having had bad math teachers who left them hating exact sciences forever, others just plain fail at handling higher mathematics. Whatever the reason, this translates to most writers having made sure to take as little math in basic school as possible. Per the standard American high school curriculum, mathematics become an optional subject around the time when calculus is taught, so for anyone who quit the subject at the first opportunity, it's simply the hardest topic they're familiar with.

Because of this, in media works "calculus" is often used as shorthand for "brain-hurty smart people stuff." This is somewhat of an exaggeration—beginning calculus is not particularly difficult as mathematics goes, and is the foundation for much of the true higher maths and physics. And everyone's brains use the processes represented by calculus in their everyday lives (the derivative is the rate of growth or decrease, the integral is the cumulative total); what makes it difficult is substituting number-crunching for intuition. However, there are different kinds of intelligence, and mathematics that seems simple to one person can be entirely opaque to another.

Compare E = MC Hammer, which is when mathematical equations (often gibberish) are displayed to imply that math is occurring, and Mouthful of Pi, where brilliant mathematicians know pi to a ridiculous number of places. See also Formulaic Magic.