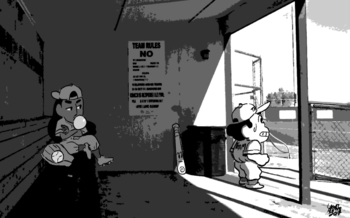 Steven and Connie are enjoying an order of fry bits on a bench, and Steven is cheerfully saying how nice it is they can just have normal days.

Suddenly, an ominous voice comes over the loudspeaker telling them to stop and drop the bits. Steven flies into a panic and apologizes that he just couldn't resist them. It turns out, however, it's not the real police: it's Doug Maheswaran, Connie's father. He's come to Beach City for a special assignment: there's been vandalism at Funland, and they've requested he stake out the place at night to see if he can catch the culprits. Doug says his job is not as exciting as his wife's job as a doctor or Connie's job helping Steven save the world, but the kids offer him encouragement.

Steven and Connie ride along in back as Doug explains how dark it gets at his job and that his company equips him with — a flashlight. Steven and Connie find some clothing and disguise items in a box. Connie calls herself Veronica Cucamonga and Steven calls himself Peter Pizzapopoulous. Connie says that last name sounds more Greek, despite Steven talking in a cartoonish Italian accent.

They don't have to wait long to find their culprit, despite the way the fence was broken seeming to indicate otherwise. There's a brief chase, but when it's all over, all Doug, Steven and Connie find is Onion, who attempts to protest his innocence. Unfortunately no one but his family understands Onion, so his attempt to communicate is misunderstood. Doug is no hardcase, though. He asks Onion if he's learned his lesson, and if he'll stay out of Funland after closing time. Onion seems a little out of sorts, but answers in the affirmative. Doug lets him go. He drives off with Steven and Connie.

As Onion is left alone, a pair of shadows — one really large and one really small — loom out of the darkness.