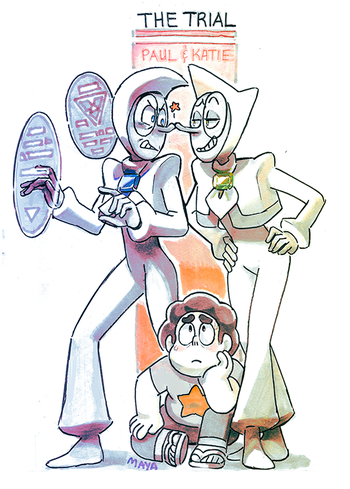 Steven declares his awareness that his mother did something bad. And that whatever Homeworld has in store, he's ready. But there's no reply.

Steven stands alone in a pale, featureless round-edged room. He is in there long enough for a montage of him moving around and yelling for anyone to let him know what's happening. He even calls for Lars. But there is no answer. Steven finally begins to settle down when the wall slides open and reveals a harried-looking blue Gem who introduces herself as Zircon. Zircon says they have only a brief minute to prepare his defense and asks what Steven knows about the shattering of Pink Diamond because the files are all unbelievable.

Steven sticks to his story, insisting he did it, much to Zircon's consternation. Zircon advises him not to say so even if it's true. Their brief moment passes, and they're summoned out into the Homeworld version of a courtroom. Another Zircon appears, this one greenish-yellow, and smirkily asks if blue Zircon isn't committing treason by defending a rebel.

Advertisement:
Blue Zircon: I was assigned to this!

Yellow Pearl and Blue Pearl arrive, each giving extended greetings to herald the arrival of Yellow and Blue Diamond. The two Diamonds look at Steven. Yellow declares that they should shatter "Rose" just for looking the way Steven does. Blue says she wants the trial, to hear what her story is.

Blue Diamond: I want to know what she thinks we're going to do with her. Because I want to do something ... worse.

Yellow Zircon begins the Extended Greetings to her Diamond but Yellow dismisses the necessity for full formality due to time. So Yellow Zircon gives a bit of an opening, brings Lars to the room to show how hideous the creatures are that Rose turned on her own kind for. Lars tries to talk, but Yellow Zircon bubbles his head to mute him. She then brings in Eyeball Ruby to give testimony. Eyeball gives a highly biased and completely shortened version of the events of "Bubbled". Steven insists that he's only glad that the Ruby is okay. Ruby is sent out of the room and Yellow Zircon rests her case. Yellow Diamond is satisfied, but Blue Diamond insists that the defense be given the opportunity to speak.

Blue Zircon is lost on what to say but Steven cuts her off, once again declaring himself guilty. Blue raises Steven's platform and asks how Rose shattered Pink Diamond. Steven makes what he considers an educated guess, describing the conflict, guilt, and sadness Rose must have felt in doing the deed, and that she must have used the Breaking Point to do it. All through the confession, the Pearls are rather puzzled, and Blue Zircon is banging her head against the wall, but not hard enough to poof herself.

Blue Diamond: It was a SWORD!

Blue emits such a huge wave of grief that everyone in the room is immediately forced to cry the tears she cries. Yellow gets up and declares a short recess so Blue Diamond can collect herself.

Blue Zircon demands to know why Steven was using "if's" instead of "what" actually occurred. Steven just sticks to his insistence that he did it. He finally says Rose did it, and since he has her gem, he has to pay for what she did. Blue Zircon realizes that Steven doesn't know how it happened...and that the reason the Diamonds want "Rose" to explain "how" she shattered Pink is because the official story doesn't make sense.

When the trial resumes, Blue Zircon comes out with renewed energy and begins to paint Rose as a flawed Gem who turned on her own kind out of a misguided attachment to the Earth, and that as the Diamond overseeing Earth's colonization, Pink was Rose's enemy — therefore, Rose had everything to gain by shattering Pink. But even though Rose may have wanted to shatter Pink, Blue Zircon asks, could she?

She then asks for (and receives) permission to present Blue Diamond's palanquin. Once it appears, she does a walking re-creation of the crime scene, describing how witnesses saw Pink exit her palanquin and take a few steps forward before being attacked from the front by Rose, shattering under her sword's blow. She states that while everyone knows these details, no one has asked how this could have happened.

Corrected and chastened, Blue Zircon continues, explaining that at the time Pink Diamond was shattered, Rose had already been a recognized threat to Pink for several centuries- and not only that, there were no Rose Quartz soldiers in Pink's entourage or guard. So how could an instantly recognizable Rose Quartz, with no business being anywhere near Pink Diamond, get so close in the first place? Where were Pink Diamond's attendants? Her Agates? Her Sapphires? And where was her Pearl? Yellow Diamond — already impatient and eager to end the proceedings — is getting very agitated by Blue Zircon's line of questioning.

Yellow Diamond: They were with her, of course! They saw the whole thing!

But Blue Zircon is undeterred, rightfully pointing out that despite that, none of them saw Rose's approach. If they already knew Rose was a legitimate threat to their Diamond, wouldn’t her Sapphires have seen Rose's assassination of Pink coming well beforehand and warned her? Wouldn’t her Agates, upon seeing Rose, immediately try to fight her off in defense of their Diamond? And even if Rose somehow did manage to slip past all of Pink's security, wouldn't her Pearl — her made-to-order servant and handmaiden, who would never leave her side unless Pink herself directly ordered her to — have noticed Rose and cried out in a last-ditch effort to warn her mistress of the danger? How was Pink Diamond taken so completely by surprise?

Blue Diamond is captivated as Zircon concludes her analysis, claiming that whoever shattered Pink was someone already close to her — someone her guards would allow to get near her with no questions asked or suspicions raised. Someone that Pink would listen to if they asked her to stop the palanquin and step outside. For the killer to have gotten so close that no Gem raised an alarm or even attempted to stop them, it would have to have been someone they wouldn't have thought to be alarmed by. Someone with the authority to cover up their crime by pinning it on Rose Quartz, who - already branded as a terrorist out to stop Pink's colonization of Earth by any means- was a perfect scapegoat.

Blue Zircon: Someone with supreme authority. Someone... like one of you!

Blue Diamond jumps to her feet, scolding Yellow for being so angry and poofing the Zircons. They begin arguing. Steven and Lars realize they have an opportunity to escape and race to the palanquin. As Steven gets a rudimentary grasp on the controls, they look up, distracted from their argument by the motion. Steven sends the palanquin leaping into the sky, through the roof, and it wobbles then falls from the high tower.

Yellow Diamond blasts a hole through the wall and calls after "Rose", saying that while she may have been able to hold her ground on Earth...

Yellow Diamond: You're on our world now.

The Palanquin continues plummeting and is soon lost from sight in the darkness.