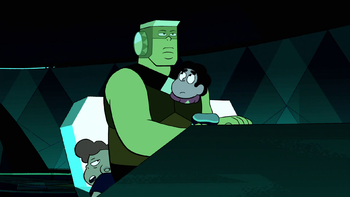 Not the way Steven imagined spending time with Lars...
Advertisement:

Aquamarine's ship has taken off and is on the way to Homeworld. The other Topaz appears, carrying Lars. Steven is freaked out since he thought he'd got all his human friends off the ship when he gave himself up to Aquamarine. He tries to tell Aquamarine that the deal is off since he was supposed to have been in trade for all the humans, and there's still one on board. Aquamarine taunts Steven and mocks his upset, then ascends to bask in her victory. Topaz fuses once again to trap Steven and Lars in her immense body, and responds to Aquamarine's order to pilot the ship.

Lars complains at being sat on and he and Steven begin to talk, having nothing else to do. Lars figures Topaz isn't listening and can't hear them anyway with her big headphones on. Steven tries to get Lars to use Steven's jeans to snag one of the nearby gem stabilizers, but Lars barely puts any effort into it, despite Steven's repeated urging. Lars finally gets frustrated and balls up the jeans, throwing them short of the disruptors.

The ship judders and Aquamarine, figuring the Crystal Gems damaged the engine before they left earth, commands Topaz go below and fix it. Lars confesses that he hid because he was afraid. He ran from Sadie in trouble because he was afraid, and that he's a wuss, always afraid all the time. Tears flow as he speaks about being afraid of going to the potluck, and that trashing his ube roll was how he got abducted. He says he's not like Steven, strong, unafraid, and always able to help people.

Steven goes on to tell Lars about what he's been through, how he ended up at this point, and that he doesn't know what is waiting for him on Homeworld. Steven admits that he thinks it's terrible of him to be glad Lars is there because he doesn't want to be alone. Lars makes a remark to try to encourage Steven, and Steven responds with amazement that Lars can do optimistic. But he says he prefers the real Lars, who is real with him about when things are awful. Lars admits everything is awful right now...

...and suddenly a new voice joins the conversation. It's the fused Topaz, who has been moved by Steven and Lars being there for each other. She tells them she wouldn't be able to cope, each Topaz without the other to bring her strength and support. She explains she hates going on these missions and has to pretend to be fine with it. She gushes about how beautiful their emotions are and gets to her feet, ready to help the boys in any way she can. Steven says he needs to get Lars back to earth and Topaz readily complies.

Topaz readies an escape pod with coordinates set to return to Earth, and is about to unfuse so Lars can get in it. But Lars insists that Steven come too. Steven refuses on the grounds that he turned himself in. As they argue, Aquamarine arrives and demands to know what's going on.

Emboldened by the love of the two friends, Topaz easily pins Aquamarine to the wall with a giant hand. Aquamarine presses her only advantage, slyly asking what would become of Topaz once they got back to Homeworld, if it was revealed she'd mutinied and poofed Aquamarine.

Aquamarine: You'll be separated! And shattered!

This threat is too much for Topaz to risk — losing herself and her other halves! She lets Aquamarine go. Aquamarine destroys the escape pod, so no one has a chance to get away.

Once they arrive on Homeworld, Topaz un-fuses. The left one walks left with Lars. The right one walks right with Steven. They call for each other until they are each shifted out of sight by the wall closing behind them.