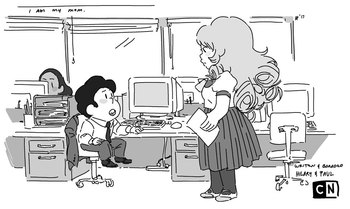 The episode begins with Steven informing the Crystal Gems of the situation, calling it an emergency. Pearl asks why Homeworld Gems would be stealing humans from Beach City. Steven mentions that the humans were taken by a Topaz fusion and an Aquamarine. Pearl is shocked and scared, saying that the Diamonds must have sent them personally. Steven infers that the Diamonds must be collecting more humans for Pink Diamond's Zoo. Amethyst is curious as to why only Steven's friends were taken and not anyone else. He receives a picture of Funland sent from Connie's phone, so they quickly head over there.

The Gems spread out to find Topaz and Aquamarine. Steven calls Connie and hears her ringtone from far away. Steven follows the sound and finds Connie's phone dropped on the ground. Garnet, Amethyst, and Pearl follow him, and Pearl asks if that was Connie's phone. Suddenly, a huge stomp is heard behind the merry-go-round. Topaz peers out from behind, as Aquamarine shows up. Sarcastically, Aquamarine feigns concern that they have been found. Stuck inside Topaz, the captured humans (Sadie, Lars, and Onion) let out muffled screams for help (except Jamie, whose mouth is unblocked and fully able to express concern). Aquamarine asks where "My Dad" is, as she notices that Steven knows all of the captured humans (mentioning that "the list" did come from a "Steven"). While Steven does not understand, Garnet tells the Homeworld Gems to let the humans go, but they refuse. Aquamarine asks who they even are.

Revealing themselves as the "Crystal Gems", Aquamarine brushes this off, remembering hearing about "Rose Quartz's lackeys" in a report. Aquamarine and Topaz are not on the Earth to beat Pearl, Garnet, Amethyst, or Steven. They promise to let them go if they told where "My Dad" is. Steven screams that he doesn't know a thing about "My Dad". Aquamarine claims that Yellow Diamond asked for "a 'My Dad', a 'Connie', a 'Lars', a 'Sadie', a 'Mailman' and an 'Onion I Think' — six human variations specified on a report by Peridot-5XG". Steven remembers and "flashbacks" to the events of "Marble Madness", when he was telling Peridot about the many humans that still existed on Earth, and listing the examples ("...there's my dad, Connie, Lars and Sadie, the mailman, Onion... I think..."). Steven pieces together that Aquamarine is literally looking for someone named "My Dad", based on a list he unintentionally gave to Peridot. Steven gets upset and blames himself for letting this happen. Garnet gets ready to punch Topaz, but is stopped when punching her would hurt the humans trapped inside. Garnet is grabbed by Topaz, who throws her into a wooden fence.

Pearl tries to hit Topaz, not harming the humans with her sharp and precise spear. While Pearl is flying toward Topaz, Aquamarine freezes her in mid-air with her wand. As Pearl is frozen by Aquamarine's wand beam, Aquamarine flicks her into the sky. Amethyst uses her whip to try to pull Connie out of the fusion, but Topaz uses the whip to knock Amethyst down. Aquamarine sarcastically asks Topaz if their mission states that the collected humans needed to be alive. From direction from Aquamarine, Topaz grabs Jamie and almost crushes his head. Steven stops Aquamarine, saying he will tell her where is "My Dad" is. Steven makes up the fact that he is "My Dad". Aquamarine, somewhat doubtful in this "Steven" also being a "My Dad", ends up accepting and believing this answer in order to make their mission faster and get off the planet. The Topazes unfuse and are ready to engulf Steven in their fusion. Pearl asks if Steven knows what he is doing, as Steven gives an affirmative thumbs-up in response, before being engulfed in their fusion. Steven has a plan to form his bubble while inside Topaz, but Topaz's mass is too thick for him to successfully do so.

Aquamarine, then, reveals her spaceship, camouflaged as part of the merry-go-round. Topaz jumps on with the captured humans, as Aquamarine blows a raspberry to the Crystal Gems. As she floats away into her ship, Pearl tries and fails to stab Aquamarine with her spear. With the Homeworld Gems and captured humans now the ship, Aquamarine sighs in relief. She sets a course to Homeworld, bragging on why the Diamonds needed her for this easy mission. Steven is finally able to form his bubble, expanding within Topaz which causes her to unfuse. In this explosion, the humans are freed. A short battle inside the ship starts. A topaz summons her weapon, a mace, and Connie suggests that she and Steven fuse. In a lack of time, they are unable to; the Topaz instantly attempts to use her weapon but is blocked. Meanwhile, Sadie and Lars are trying to get out. Lars is laying on the floor, while Sadie is grabbed by a Topaz and is not able to escape. Lars, not knowing what to do and afraid of them both getting hurt, hides under a step instead of trying to rescue Sadie. After fighting the Topazes with Connie, Steven is able to open the ship's door, approaching it with Connie, Sadie, Jamie, and Onion.

The Crystal Gems have fused to form Alexandrite, who is holding down the ship and preventing it from moving. Steven has her move the ship closer to the water so they can jump down. Onion quickly jumps off the ship, followed by Jamie (thrown off by Steven), Sadie and Connie. With the humans are falling into the water, Aquamarine uses her wand, freezing Alexandrite and the humans in place. Aquamarine states that they cannot go back to Homeworld without getting all six "human variations", and are unable to leave without Steven, who they believe is "My Dad". Under the stress, Steven thinks a bit and admits that he is not "My Dad". Aquamarine is getting upset, as this mission keeps getting longer. Steven mentions that he can end the mission. As Aquamarine doubts Steven's claims, Steven tells them that he is someone the Diamonds would want more than any of the humans. Steven tells them that he wasn't "My Dad": he is none other than Rose Quartz, the leader of the Crystal Gem Rebellion, the Gem who shattered Pink Diamond, and shows his gemstone as proof. Aquamarine is shocked and unfreezes everyone and Alexandrite unfuses in the process.

The Gems ask Steven what he was doing, and he turns to everyone, telling them he was the only one who can stop what Rose started. He says Rose wouldn't have wanted him to do this, but he does and heads inside. The Gems and Connie protest, but Steven turns away. Pearl begins to cry and Connie screams after him, telling him not to follow them. But it's too late, Steven tells the group he loves them as the doors close. The episode ends with Connie screaming after Steven as the ship goes warp speed, leaving Earth.