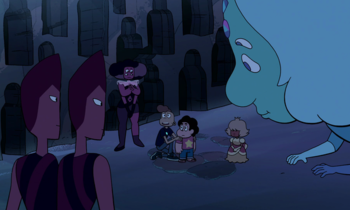 Steven and Lars with the Off Colors.
Advertisement:

In the depths of Homeworld, Blue Diamond's palanquin — Steven and Lars' getaway vehicle from the previous episode — lies in ruin. Steven managed to bubble Lars and himself shortly before they hit the ground, so they're mostly okay... after all, their bones are only a little broken. Steven admits that he has no idea where he's going, since it's his first time on Homeworld. The two realize they're being hunted — robonoid drones are scanning for them.

Lars: If you hold perfectly still, they can't see you. I Saw It in a Movie Once!

Unfortunately, his advice proves incorrect. Once the scan beam crosses Steven's gem, it lights up in response and the eye fires at them. The two boys dodge and tumble to the ground.

Lars: I think that movie was about dinosaurs.

The eye comes around for another sweep... Lars demands to know what's going to happen. Steven gives his usual optimistic answer:

Lars stops, and says he's sick of being afraid all the time. He says that the only thing he's not afraid of is baking... then backtracks and admits that he's even afraid of that. As Steven tries to come up with something to say, a red hand emerges from a hole and beckons to them. The eye is about to find them, so they follow the beckoning hand.

The owner of the hand turns out to be Rutile, a gem who is a set of Conjoined Twins. Lars recoils in fear, but Steven assures him that it's okay. They thank the twins for helping them, and the twins lead them into a tunnel that leads to a very old, very immense Kindergarten.

Rutile calls to unseen others, letting them know that it's safe to come out. A fusion that resembles Garnet's first form emerges, nervously demanding to know if Rutile was followed. She is introduced as Rhodonite. A tiny gem who looks a lot like Sapphire but in a different color is introduced as Padparadscha. Finally, an immense fusion is introduced as Fluorite.

Steven introduces himself as half-gem and Lars as completely human. The other cave gems tell them they'll stand out on the surface of Homeworld because like them, Steven and Lars are "off-color". Fluorite explains slowly that off-color gems aren't needed, because they're different: Rutile came out wrong and only survived because all the other Rutile ran away when they emerged. Padparadscha gets visions, but they're of things that have just happened. Rhodonite is a forbidden fusion of two different gems, and was replaced when discovered. Fluorite is a fusion of six gems, but she's open to adding more "if they meet the right gem".

Before they can go further, the roving eye robonoids arrive. Rhodonite screeches that they were followed after all, and they scatter to hide. Steven and Lars watch as the robonoid scans the empty holes. But eventually it finds Rulite's hole. The twins cringe back from the beam and hold each other's hands as the beam moves inexorably toward their gem.

Lars leaps into action, feeling strongly that he has to do something to help the gems who helped them. He throws a stray rock at one of the robonoids. They turn to scan him...

Lars: [to himself] It's okay to be afraid.

... but since he has no gem, they don't see him at all. Padparadscha makes the same observation in a few seconds. While she's beaming about this wonderful new vision, a robonoid spots her and fires. Lars leaps into action again and knocks them out of harm's way.

Lars: I think that was the coolest thing I've ever done in my life.
Steven: It's not over!

The robonoids make another pass at Steven and Padparadscha, but Lars picks up a heavy stalagmite and uses it to bat them away. Steven draws his shield and reflects one of their beams, destroying two of them. The last one almost finds Rhodonite, but Lars springs into the hole where she's hiding and positions himself in front of her so her gems can't be scanned. He then leaps on the robonoid and rides it around the cavern. It tries to buck him off. He finally takes the stalagmite and stabs the robonoid in its eye.

The robonoid explodes, and the force of the concussion knocks Lars across the cavern and into a giant rock outcropping, where he impacts — hard, then falls to the floor and lies motionless. With the last of the robonoids defeated, the Off Colors applaud Lars' heroism, but Steven immediately recognizes that his friend is hurt and rushes to his side.

Steven turns Lars face-up, but he's unresponsive. The other Off Colors look on as Steven leans in to listen for a pulse, a heartbeat, anything.

Steven's eyes fill with tears; he holds Lars' lifeless body and sobs his little heart out. His tears roll down his face to his chin. One of Steven's tears drips onto Lars' face.

A second or two passes, then the spot where the tear fell sparkles and glows. As Steven watches with astonished wide eyes, the glow covers Lars' entire body, then fades to nothing.

Lars stirs, wakens, and sits up; seemingly none the worse for wear aside from a scar over his right eye. Steven's inherited healing powers brought Lars back to life! However, Lars seems to have been somehow altered in the process — the most obvious change being that his skin and hair now sport a familiar shade of pink...

Padparadscha: Something incredible is about to happen to Lars!