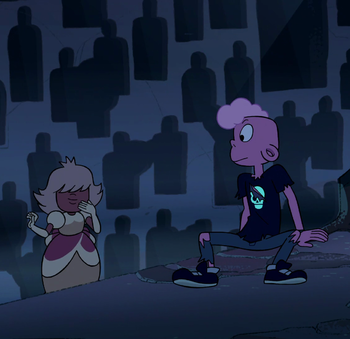 "I predict Lars will change in hue. What a mystery!"
Advertisement:

Moments after his revival, Lars is a little confused, especially as to why he is suddenly pink from head to toe.

Steven apologetically explains the last few minutes to him — that he was badly wounded in the fight against the robonoids, and that Steven brought Lars back to life.

Steven: It was an accident! Well, I probably would have done that on purpose if I knew I could do that, but I didn't really ask your permission, so I'm sorry.

Steven asks if he's sore, hungry, thirsty or tired. Lars says he isn't, even though it has to have been days since he's eaten or drank anything. He's just sort of freaked out to be pink and to realize that he was ... away from life if Steven brought him back to life.

Lars parses out what this means and after a brief moment of worrying if he's now a zombie, realizes that he's in better shape than the obvious alternative. The Off Colors, having hurriedly blocked the entrance with Steven's help, wonder what to do. If they remain here in the Kindergarten, where the robonoids already found them, they're in danger. If they go out to the surface, they're in danger.

Steven goes to take a closer look at the now-pink Lars. As he touches Lars' mohawk, it lights up and Steven's fingers vanish into it. Lars is very curious as to why his hair lights up now.

Steven recognizes the effect, and asks Lars to bend down so Steven can check.

Steven: You may feel a slight foot in your head.

Steven takes a deep breath, sticks his whole head in and recognizes the space he's in now as the pocket dimension inside Lion's mane. He sees a tree near himself, but is momentarily dismayed. It's not the tree in Lion's mane in which Rose kept her mementos and Steven keeps his things, but a glance around proves that tree is only a brief walking distance from this one! Steven makes his way through the thick pink hair-grass, and emerges from the pocket dimension — via Lion, back on Earth! Lion doesn't seem terribly surprised or excited to see him. Steven looks around, but the house is dark. No one's home. He sees the faucet and rushes to have a couple glasses of water. He makes himself a quick sandwich, crying tears of joy as he takes a bite, then packs some food and drinks to bring back to Lars.

Steven comes out and hurriedly explains what's going on with Lars' hair.

Steven excitedly explains that it's a direct route home to Earth! The Off Colors are briefly confused about food, so Steven sidetracks a little bit to explain that to them. They're amazed and incredulous to hear that Steven and Lars' homeworld is Earth, since Homeworld's history insists that it was annihilated by the Diamond Authority after the war.

They tell the Off Colors that they should come back to Earth with them — they can be themselves without fear of destruction, shattering, breaking or judgement. They think it sounds wonderful and are ready to go, until a problem presents itself: Lars can't go back to Earth because he can't access the dimension inside his own head.

Steven insists on at least trying and pulls Lars' arm into the dimension with him, but the rest of him won't go.

Steven is dismayed and feels guilty that Lars can't travel back to Earth. Lars insists the Off Colors and Steven should all go; he tells the Off Colors that Earth is beautiful and they'll love it there, but they refuse: Lars sacrificed his life to save them, and as far as they're concerned, he's one of them now. An Off Color. And Off Colors stick together. They won't leave him if he can't go, so they'll just have to find another way off Homeworld.

Lars insists that Steven return anyway — he's the one the Diamonds are after, and he'll be safer if he's back on Earth. Steven protests, but Lars isn't having it.

Lars: Don't argue with me! You're always trying to help me! You brought me back to life! Just let me be someone who deserved it.

Steven isn't completely happy with this idea, but he goes with it anyway. He goes to touch Lars' chest in their usual way, but Lars bats Steven's hand away and gives him an actual hug. Then he bends down on one knee so Steven can get back into Lars' hair. Steven comes out of Lion's mane back at home again. A second or two later, the Warp Pad activates. The Crystal Gems plus Greg and Connie are back, worried and deeply crestfallen that they can't get the one ship they can access in working order.

Pearl is all flustered and upset. She paces the kitchen tearfully and greets Steven even as she worries aloud about what Homeworld might be doing to him.

Amethyst and Connie look astonished. Pearl looks dumbfounded. But Greg and Garnet look completely overjoyed. Greg rushes to embrace his son with tears in his eyes. They hug, both smiling happily at having been reunited. Steven laughs from the joy of being home with his family.