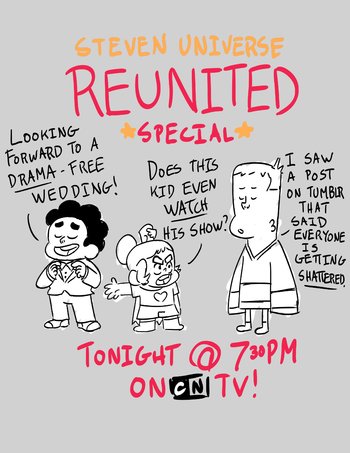 It's the day of Ruby and Sapphire's wedding. Steven, getting ready in his bathroom, starts singing "Let's Only Think About Love", about how the recent revelations about his mother and all the other dramatic events have been weighing on him, so he'd rather focus on the wedding. As he does so, Ruby and Sapphire start to get into their outfits, with Ruby telling Sapphire not to look at her, even with future vision. Bismuth is wearing a suit of armour because it's the nicest thing she owns. As the song continues, Amethyst, decorating the canopy with flowers, rather regrets having gotten roses given the recent reveals about Rose, but Steven assures her that Peridot's gone out to get more flowers. Warping over, he finds a mournful Peridot staring at the former location of the barn, and Steven sings about Lapis Lazuli's departure before bringing Peridot back to the house. As the song ends, Steven jumps off his front porch and lands in front of the canopy, where Sapphire, dressed up in a suit, is waiting. All the guests have arrived, and the ceremony is about to begin.

To Greg's musical accompaniment, he, Amethyst, Connie, Pearl and Bismuth proceed down the aisle, with Peridot as flower girl throwing flowers at guests with such force that she knocks Mr. Fryman off his seat, before reporting to Steven with a salute that "Wedding Commander, all flowers have been deployed!" Ruby comes outside, in a wedding dress with flowers in her hair, and upon seeing Sapphire she gets so excited that she runs down the stairs, forcing Greg to speed up the music he's playing, before heading down the aisle in a burst of flame to stop next to Sapphire. Amethyst rushes to stomp out some of the residual flames. Steven, officiating, asks Ruby and Sapphire to each describe what their love means to them. Ruby talks about how not even the Diamonds can separate them, and if they try they'll fight them; Sapphire goes into a Purple Prose description of how meeting Ruby changed her fate from one unchanging path into the future into many paths, before summing it up as "You changed my life. And I changed yours." With the exchange of vows, Steven gets to read out the whole thing with Ruby, but Sapphire's excitement leads her to say "I do" before Steven can really get started with hers. Bismuth nearly misses her cue to deliver the wedding rings because she's crying Tears of Joy, and Ruby and Sapphire exchange rings before Steven says they can now fuse. Ruby and Sapphire kiss before fusing into Garnet, who has a huge smile on her face.

At the reception, most everyone has fun. Mayor Nanefua dances with her two bodyguards. At the Bouquet Toss, Garnet throws it so high it becomes A Twinkle in the Sky, to Jenny and Kiki's disappointment. Ronaldo attempts to discuss armour with an unimpressed Bismuth. Bill Dewey and Jamie, feeling alone, decide to dance with each other. When the bouquet comes back to Earth shortly thereafter, it lands on the head of a confused Bismuth, as Amethyst and Pearl laugh. Garnet thanks Steven for planning the wedding so well, and he starts crying happily during the conversation. She tells him he doesn't have to cry, wiping the tears away, and Steven says that he's just so happy. But then Steven's tears start up again, and he and Garnet realize that he's not controlling his tears... Garnet immediately whips off her visor and looks into the future, exclaiming that Blue Diamond is coming, and she's not alone. A shadow falls over the reception, and everyone looks up as the clouds are brushed aside to reveal the arm spaceships of Blue and Yellow Diamond. As most of the guests run, Steven tells Nanefua that they've got a code blue and a code yellow.

Instead of stopping at Beach City, the Diamond ships fly past it and start smacking the ground off in the distance near the former location of the barn, leading Steven to realize they must be trying to awaken the Cluster. He has to quickly fill Bismuth in on the details, and explains that he can communicate with it if he goes to sleep. However, the noise from the Diamonds' banging is so loud that Steven can't get to sleep until Greg tries playing a lullaby on his guitar, which puts Steven out immediately. In the mindscape, Steven tries to calm the Cluster down and get it to stay in its bubble, but doesn't succeed, waking up as bright white light pushes him out of the mindscape. Everyone runs outside to watch as the ground cracks open and ghostly shapes emerge. In town, Nanefua urges citizens to get to their designated safe areas. As the Cluster partially manifests in the form of a giant hand and arm, Ronaldo draws his souvenir katana, only to be pulled away by Peedee. The Cluster flexes its hand before attacking the Diamonds' ships, to the immense relief of Steven and his friends. After punching away Yellow Diamond's ship, it gives a thumbs up to Steven before Yellow returns. The geoweapon and the spaceship get into a supersized arm-wrestling match, anchoring their elbows in the sea.

But the Crystal Gems and their allies have their attention focused elsewhere when Blue Diamond's ship flies overhead and lowers its hand to the edge of the beach, depositing the Diamond herself on the shore. She's upset about "Rose Quartz" allegedly daring to live on what was Pink Diamond's planet. When Greg suggests trying to use "the Ol' Universe Charm", everyone tells him off, and he retreats into the house. Steven attempts to prevent a fight by telling Blue that he is Pink Diamond, technically, but she doesn't believe him and blows him back with a blast of light, only to be caught by Alexandrite. The giant fusion attacks, but Blue's Emotion Bomb defuses her quickly, leaving everyone but Connie and Lion, non-Gems, on the ground sobbing. Connie summons Lion and they attack, Connie leaping at Blue with Rose's sword, but she catches it in one hand and, recognizing it as the weapon that supposedly shattered Pink, breaks it. Lion catches Connie before she can hit the beach, and they retreat. Garnet is the next to approach Blue, powering through the emotion control as she declares her status as a personification of the love of two Gems that Blue couldn't stop millennia ago and can't stop now, which leads Blue to realize who she is. Blue is not impressed by Garnet clinging to her foot, though, but when Garnet says that she just had to keep Blue from moving two steps to the right, a drop of water falls on her. She looks up to see Lapis Lazuli, with the barn in tow, just before Lapis lets the building fall on her head as Garnet jumps out of the way.

Peridot is happy to see Lapis again, and the water Gem explains that she just couldn't keep running away again, having decided to join the Crystal Gems. The happy reunion is ended when Bismuth, seeing Blue recovering, warns everyone to look alive. The barn is destroyed as Blue, angrier now, bursts out from under it and launches a barrage of lasers at them, leading Steven to summon a giant shield to protect everyone. When the barrage is over, they attack, Connie and Lion leading the charge from under the raised shield. Despite her attack with soda cans being the least effective, Peridot challenges Blue to fight her. This display of fighting spirit impresses Bismuth, who gives her a boost by throwing her into Blue Diamond's face. This distracts Blue for long enough that Lapis gives everyone else a Fastball Special at Blue. Steven's spiked bubble shield, hitting her last, is the most effective, dropping Blue to one knee.

Meanwhile, Yellow Diamond's ship loses against the Cluster, and it crashes onto Blue Diamond's ship onto Blue Diamond herself while debris hit the Beach House as Greg emerges from the destroyed house with Cat Steven. The Cluster gives a thumbs up and retreats inside its bubble in the Earth's core. Just when it looks like both Diamonds have been defeated and Garnet congratulates Steven while Peridot boasts about jumping onto Blue Diamond's eyes, Yellow Diamond exits her ship, to the Crystal Gems' horror. She helps Blue Diamond out of the wreckage, whose only visible damage is her hair being slightly misplaced, as both Diamonds look at the Crystal Gems furiously. Peridot calls Yellow Diamond "Yellow Clod" and asks her former superior if she remembers her. Yellow Diamond denies it and wastes absolutely no time poofing Peridot by zapping her with her powers. Desperate, Steven tries to explain to Yellow Diamond that he's Pink Diamond, only for the enraged older Diamond, only knowing him as Rose Quartz, to stomp on him with her boot.

Steven wakes up to find Connie fussing over him, and tries to tell her he's fine with no effect, upon which he realizes he's in a mental space where all the combatants are represented by huge statues of themselves which they stand on top of. He grabs Connie and tells her it's a standard psychic ghost situation, asking her to guard his body for him while he tries to get through to the Diamonds, to which she agrees. Lapis is poofed as she declares that she's only just begun to fight, so Steven gets a move on. Stopping on the heads of each of the Crystal Gems, he encourages Garnet, who's barely surprised by Steven's psychic episode; gives Amethyst a confidence boost, so her internal monologue goes from "Don't get shattered" to "I can do this!"; reminds Pearl to fight for herself as well; and encourages Bismuth, who's worried that she might lose her friends again so soon after getting them back. Looking at Peridot and Lapis, represented by their gemstones alone, he promises them he'll do his best. Then Steven heads for the Diamonds, taking a big jump to reach their mental projections in the mindscape. He finds that Yellow and Blue are both unhappy inside, Yellow still consumed with guilt over giving Pink a colony in the first place, since she knew she wouldn't be able to handle it; and Blue thinking that defeating the Crystal Gems won't do anything to help.

Steven is knocked away by Yellow's electric aura when he tries to reach her in the mindscape, so he goes over to Blue, and manages to force his way through her aura to touch her, trying to tell her that Pink wasn't shattered before he's blown back. Blue is struck speechless, though, by the presence that she hasn't felt in so long. Yellow wonders what's gotten into Blue, and dismisses what the other Diamond says before Steven gets through her aura to make contact with her as well, striking her speechless as well. The two Diamonds manage to locate their "attacker" in the mindscape, and target Steven, knocking him back with their powers. Steven resists, and manages to unleash his Diamond aura for the first time, leading a shocked Yellow and Blue to realize that he really is Pink, sort of. In the mindscape, Steven floats down to land on Blue and Yellow's hands.

On the beach, Steven wakes up to find everyone staring down at him, concerned, including the Diamonds. Blue is crying again, this time with Tears of Joy.

Ruby and Sapphire marry as a way to be together on their own terms, rather than just because someone (who ended up deceiving them) told them to.

Ruby and Sapphire marry as a way to be together on their own terms, rather than just because someone (who ended up deceiving them) told them to.