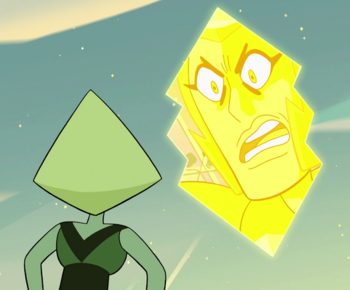 "What do you know about the Earth?"
While the Gems talk about their not-yet-finished drill, Steven follows Peridot into the barn. He takes her into the car inside, and asks her about her loyalty to the Diamond Authority. She reaffirms that she's loyal to the Diamonds because she believes that they're objectively better than normal gems, especially her supervisor, Yellow Diamond. Steven tells her that Yellow Diamond is behind her, and when Peridot turns, he snatches the thing she'd been hiding behind her back and then locks her in the car.
Advertisement:

Peridot is horrified at being imprisoned, and asks why he did it, since they were supposed to be friends now. Steven points out that she took something from the Moon Base, and asks what it is. She says that it's not important.

Steven: Then why don't I just smash it?

Peridot caves and admits that it's a communicator, meant for the express purpose of contacting the Diamonds. Peridot has a plan for it. Steven asks if she's still trying to contact Homeworld.

Peridot: Yes, of course! I figured it out. You simple clods keep trying to protect the Earth, but you can't do anything right. I let myself get carried away too, laughing, singing, building our little machine. But don't you see? None of that matters! All that matters is that I'm of use to Yellow Diamond. This planet can be of use to Yellow Diamond! I must contact her to reveal what I've discovered!

Steven is horrified by this, and argues that the Diamonds are bad, and don't care about Earth at all, as they tried to hollow it out and now are trying to blow it up. Peridot says that "that's the point!" This does not endear her to Steven, who locks her in the car with the child proof locks. He calls out for the Crystal Gems as Peridot wails in protest.

Outside, Steven shows the Crystal Gems the communicator, horrifying Pearl and infuriating Amethyst, who attempts to come up with some derogatory nicknames for Peridot. She can't, though, as she's too mad. Peridot honks the car's horn, prompting Steven to comment that she now knows what a horn is.

Steven is furious at Peridot because she betrayed his trust by continuing on her Earth-Shattering Kaboom plans, and at himself because he thought that he could make her see the error of her ways. Garnet tells him that he's optimistic and patient, just like his mother, but the truth is that some people are just not worth it. Pearl tells him:

"Look on the bright side-You got this thing away from her before she did any real damage."

Steven agrees. Of course, Peridot breaks out right then in her robot — the one she built in Back to the Barn. She gloats that their "Invisible rotary shield" was no match for her and her application of logic — in other words, she rolled down the car's window. She steals the communicator and runs off. Amethyst transforms into a helicopter to follow her.

Steven is stuck in a Heroic BSoD because he befriended and encouraged Peridot, so Garnet uses her power to expand her arms to catch him and put him in the helicopter. Peridot tries to work the communications device with her robot's claw hands, but doesn't succeed before Amethyst and the Crystal Gems catch up to her.

The Crystal Gems (including Steven) hide behind the wreckage of the robot while Peridot talks to Yellow Diamond. At first she just gets Yellow Pearl, who berates Peridot for using the line without proper authorization. Yellow Pearl is interrupted by someone offscreen, who asks why there's someone on the Diamond Line. Yellow Pearl says that she was just about to tell Peridot... something. The offscreen voice interrupts her and is revealed to be Yellow Diamond, who is huge. Yellow Diamond tells her Pearl that she'll take it from there.

Peridot is awestruck, but says: "Peridot, reporting in." Yellow Diamond asks which Peridot, and Peridot clarifies that she is Facet 2F5L, Cut 5XG. She begins to tell Yellow Diamond that she only used this because there were no other options, but Yellow Diamond interrupts to ask what happened to her mission, her Jasper bodyguard, and her ship. Peridot does not reveal the Crystal Gems' involvement, instead saying that the ship was destroyed in an accident. When Yellow Diamond asks about the cluster, Peridot says that it will emerge shortly. Yellow Diamond is happy about this, as it means they'll "finally get some use out of that miserable planet." She tells Peridot that a ship will be coming to retrieve her shortly.

Peridot, however, has other things in mind. She reveals the real reason she contacted Yellow Diamond: She wants Yellow Diamond to stop the Cluster. Why? Earth is special. It has an organic ecosystem, which creates resources that are entirely unique to the planet; it would be stupid to let that go to waste for just a geoweapon. Peridot even has plans for using these resources without disrupting the ecosystem. But Yellow Diamond doesn't agree- or rather, she thinks that there's something in this situation more important than the resources.

Yellow Diamond: "I don't care about 'potential' and 'resources'. I want my Cluster, and I want that planet to die. Just make that happen."

Yellow Diamond warns Peridot that she's out of line. She is a lowly Peridot, and she really shouldn't be wasting Yellow Diamond's time with her opinions. She's failed at every stage of the mission, and can only redeem herself by obeying Yellow Diamond and leaving the Cluster to grow. Peridot refuses, and tells Yellow Diamond that there are things on Earth worth protecting. Yellow Diamond asks her: "What do you know about the Earth?"

Peridot: Apparently more than you, you... CLOD!

Being insulted utterly infuriates Yellow Diamond, but before she can say any more, Peridot ends the communication. She's utterly stunned at what she just did, and collapses into a fetal ball. The Crystal Gems are very impressed, especially Steven. She hands off the communicator to Pearl, because it can be remotely detonated. The Crystal Gems play Grenade Hot Potato with the communicator for a bit before Steven bubbles it and Garnet punches it into the sky, where it blows up.

Peridot laments that she thought that she could reason with Yellow Diamond. Instead, she insulted and infuriated her commander, becoming a traitor to Homeworld in the process. This can only mean one thing. Whether she wanted to or not, Peridot is now a Crystal Gem!

We Iris Out on the Earth, with Peridot's moaning being able to be heard all the way into space.