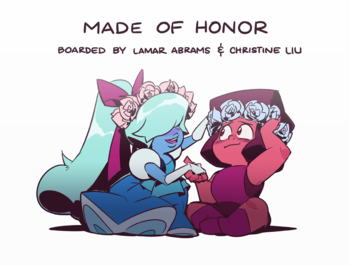 Preparations for Ruby and Sapphire's wedding are well underway. However, Sapphire laments that there are so many old friends of her and Ruby that won't be able to attend, due to being corrupted or shattered. This gives Steven the idea to, as a surprise, unbubble Bismuth, even though she was re-bubbled in the first place because she tried to kill him. When he releases her, she's ashamed of what happened before, and insistent that Steven is still better than Rose. But when she sees the corrupted Gems in the bubble room, she freaks out, believing that Rose imprisoned them for the same reason that she was imprisoned, and before Steven can stop her and explain, she releases her old friend Biggs. Biggs, who Steven knows better as one of the Great North monsters, reforms and attacks them, to Bismuth's confusion. She's forced to poof her old friend in tears, and Steven re-bubbles Biggs. Bismuth deduces that the Diamonds, specifically Pink, must have been responsible, and asks why Rose didn't stop her. Steven tells her what he'd been trying to explain before Bismuth saw the other bubbles: because Rose and Pink were the same person.

One Exposition Cut later, Bismuth admits that everything that didn't make sense to her about the war does now with the revelation, but has to scream into lava for a bit. She also admits that, in retrospect, of course Rose wouldn't want to use the Breaking Point to kill her sisters, and how the offer of the weapon must have sounded to her. But she's not sure that the other Crystal Gems will take her back, given what she tried to do to Steven before. She tells him that, given that he's kept them together when even Garnet fell apart over the shock about Rose, she considers him the Crystal Gems' leader now. Steven is confident the others will accept Bismuth back just fine, and tries to prepare a surprise for her arrival. But when she doesn't respond, he goes back into the house to find that she's left via the warp pad.

He finds Bismuth at her forge, making weapons. They have a talk about Rose, and what happened at the forge the last time they were there. Bismuth is guilty about what happened the last time, and doesn't think she's worthy of an offer of redemption. Steven eventually persuades her that if she comes back with him, the others will know that everything's all right. When they do get back, everyone but Peridot, who has no idea who Bismuth is, is shocked, and Ruby and Sapphire appreciate the wedding rings Steven got Bismuth to make for them. Bismuth gets hugs, a member of the Crystal Gems once more.