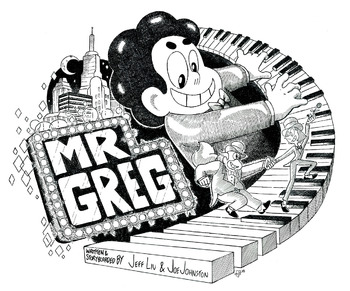 A familiar tune is heard, it's Greg's song, "Comet", except it's been repurposed as a restaurant jingle, featuring Marty singing and chomping into a burger.

It turns out that Greg's new money comes from the royalties after Marty sold the song. Greg reminisces warmly that "Comet" was what he played at his concert the night he met Rose, then elaborates to Pearl that the version Rose heard wasn't about burgers.

She would have loved it.

Pearl lingers for a little while, then goes into the house, and Greg and Steven musically ruminate on what to do with their newfound money. Greg doesn't care all that much about the money because he has Steven, and everything else he enjoys in life "don't cost nothin'". Steven suggests a vacation, someplace new for them to spend some time.

Greg becomes excited at the idea and picks Empire City, and they sing enthusiastically while packing. Steven suddenly suggests taking Pearl along. Greg and Pearl are hesitant, since Pearl has never been kindly disposed to Greg for pursuing a relationship with Rose. Steven insists.

Off they go to the big city. They gaze in awe at the sights before stopping at a fancy hotel. The concierge is unimpressed with Greg's beach bum appearance until Greg and Steven demonstrate they can afford the hotel's services. The concierge's attitude once money makes an appearance is predictable and instantaneous.

Thus begins a big show tune-style number. A bunch of hotel staff show up to make their guests feel welcome. Greg and Steven enjoy themselves, and Pearl begins to get into the spirit of things until Greg tries to get her dance with him. She refuses and walks away, looking uncomfortable.

It is night, and Steven and Greg have dozed off on the king-sized bed. In a vase beside the bed is an arrangement of roses. Pearl takes one, reminded of Rose. She smiles wistfully, then steps out on the balcony. She sings of how she continues to struggle with Rose's absence and that Rose chose Greg over her.

After the song has ended, Pearl realizes Steven and Greg are awake and had overheard her. Greg is clearly upset by what he's heard, and the reminder of how they competed for Rose's affections. Convinced there's no chance to reconcile with Pearl, Greg murmurs an apology and leaves.

While Greg drowns his sorrows with a glass of cherries, Steven appears, holding Pearl's hand. He encourages the two of them to talk to each other.

Steven: ♫ You might not believe it, but you've got a lot in common. You really do. You both love me, and I love both of you. ♫

After an awkward moment, Greg and Pearl do try to talk. Out of their mutual love for Rose, they share tearful laughter and agree that Rose always did whatever she wanted. Before long, they're dancing together, and it ends with both smiling.

Then, the concierge shows up with the hotel bill. Greg winces at how much they spent, but Pearl points out that on the bright side, dancing, singing, and hanging out "don't cost nothin'".

As they head home, Steven is happy to see that his father and Pearl are finally on the path to becoming close friends and drowsily sings the refrain to Pearl's earlier song with a more uplifting lilt.

Iris Out on the van as it disappears on the horizon.