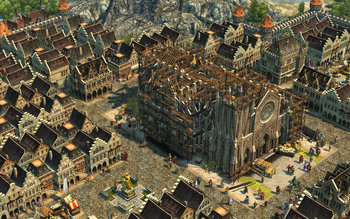 A.D., or simply Anno, is a series of 4X city builder games, originaly by the Austrian studio Max Design and later by Related Designs / Ubisoft Blue Byte Mainz when the former went bankrupt. The series is focused primarily on the colonisation and development of a variety of islands, but also has aspects of trade, technological progression, war and conquest. It consists of (in order of release):

Each game has a "Continuous Mode" wherein you can play as long as you want, competing with A.I. players (or other humans over multiplayer) for territory and resources, and a number of scenarios, often-times with several arranged to form a storyline. Players begin with a ship (or in some scenarios, a warehouse on an island) and a negative income. You have to build houses to collect taxes, but then your peasants want fish, and then they want something to occupy them and so on.

Most of the games offer a way to trade with the AI, whether other Empires or civilian trade ships. Due to general scarcity of certain critical resources until those can be produced, the latter has to be relied on to buy those resources, though other resources can be sold as well. Technology Levels ensure a progression from simple pioneers and settlers to citizens and even aristocrats, each with their own set of demands and power to pay taxes in return.

War is not the biggest factor, but it does happen, as AI players can be allies and trade-partners, or non-trade opponents and enemies to fight. In many scenarios across the various games, the human player will have to eventually defeat the AI players with weapons and conquer their islands to proceed, typically via sending ships to their islands and bombard the city walls, then unload soldiers. Alternatively, but more difficult, one can try settling on the enemy island(s) and produce soldiers there directly. Later titles introduced additional options for economic warfare, like buying up shares of the enemy's island until the whole place switches owners non-violently via hostile takeover.

Anno Domini 1257 is not related to this series.

This series of Video Games provides examples of: