Recap / Steven Universe S4E6 "Last One Out of Beach City" 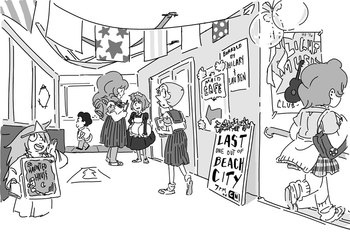 Steven and Pearl are about to start their evening solving a jigsaw puzzle, while Amethyst is excited to go to a Mike Krol concert with Greg. Who then shows up, only to reveal he's just been reminded that he'd earlier promised to play cards with Barb and Vidalia that night...and Barb threatened to withhold his mail if he bailed on them.

Greg: She is not a woman of empty threats.

Pearl surprises everyone by offering to go to the concert with Amethyst, along with Steven. Greg agrees to loan them his new Dondai for the occasion, and Pearl insists she's not just the kind of person who sits at home doing puzzles.

While picking up snacks on their way to the show, Pearl shows off her teen rebel outfit, including a leather jacket whose collar she proudly pops up.

Pearl: It's cool, because the collar isn't supposed to go that way.

Pearl also asks for an apple juice despite her usual aversion to all food, and after taking about ten seconds to figure out how to open the can, she takes a sip. She promptly gets just as grossed out as usual, but is quickly distracted by someone entering the store: a large pink-haired woman who bears a striking resemblance to Rose Quartz. Steven and Amethyst notice Pearl staring, and encourage her to practice talking to the Mystery Girl so she can do it more easily at the concert. It doesn't go well, as she drops a whole stack of cups just a few seconds in.

Back on the road, Steven points out the obvious about Mystery Girl's resemblance to his mother, which Amethyst actually hadn't noticed, and is delighted to realize what had gotten into Pearl. Mystery Girl pulls up alongside the Dondai on a motorcycle, and Pearl panics over what she should do. Amethyst suggests simply shooting a look...and then tricks Pearl into doing it right as Mystery Girl is looking back. Mystery Girl smiles and pulls ahead, only for the Dondai to get stuck at a red light. But Pearl's not giving up that easily, and only takes a few seconds to drive through it! Unfortunately, this gets the attention of the police, and Pearl can't pull over as she's never gotten a driver's license.

She evades the cops by hiding behind a billboard for Ocean Town ("No longer on fire!"), but the car won't start and it turns out they're out of gas, and nowhere near a station. Pearl despondently takes off her outfit, ranting that she wanted to show Steven how cool she was only for the night to end like this. Steven and Amethyst cheer her up as they both insist she's plenty cool to them, and it even turns out the concert is nearby.

It turns out Mystery Girl is also at the concert, and Pearl resolves to have a real talk with her. Steven and Amethyst watch from a distance, trying to figure out how it's going while unable to hear a word. Pearl starts with an awkward handshake offer, but Mystery Girl goes for it, and then even laughs at what Pearl's saying. When she comes back:

Steven: How'd it go?
Pearl: I asked about her hair, and then she asked how I colored mine. I told her my appearance is just a conscious manifestation of light. And she said, "I know how that is," although I highly doubt it. Oh, and then I added, "And by the way, I saved your planet and your species and you're welcome."
Amethyst: And how'd that go over?
Pearl: Not very well. She walked off after giving me some sort of code.

Steven and Amethyst are thrilled and inform Pearl she managed to get Mystery Girl's phone number. Pearl points out she doesn't have a phone, but Amethyst isn't too worried.

Amethyst: Pearl, you just, like, gave her some Shakespearian spiel about light, and then got her number like it was nothing? Oh-ho-ho-ho! Pearl, you're a total rock star!

Pearl takes another look at the number, and gets a small smile.