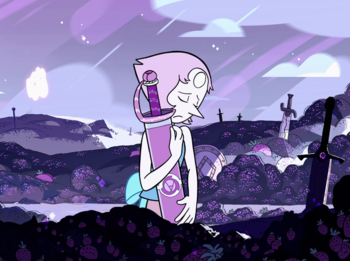 "Everything I ever did, I did for her.
Now she's gone, but I'm still here."
The Crystal Gems are on a trip back to the strawberry fields, reclaiming the giant weapons there left by Gem warriors who fell in battle 5,000 years ago. As Garnet chooses an axe three times her size, Steven exclaims he'd like something like that. Pearl suggests he find something a bit more suitable for himself. When Steven asks Lion to help him find something, the big pink cat walks away. Pearl tells Steven he needs to train it better. Steven tries to prove that Lion listens sometimes, but is ultimately unsuccessful. But after a few moments, Lion returns with a pink scabbard. Pearl says that the scabbard belonged to Rose Quartz, and angrily removes it from Lion's mouth. Pearl goes on to describe the battle. Amethyst says she wishes she had been there. Garnet insists she wouldn't have, describing how many Gems were broken and destroyed. Pearl pops up to remind them all that the Crystal Gems won.
Advertisement:

When they arrive back at the temple, Amethyst and Garnet get on the difficult task of getting the huge axe into the temple's door. Steven meanwhile can't help but ask Pearl what his mom was like. She explains to him about her bravery and beauty, gives him the scabbard... and then asks if he can keep a secret, even from Amethyst and Garnet. Steven promises, and they warp off.

Pearl: Now from here it's a three-hour hike, and then a one-hour climb at ninety degrees. Think you can handle it?

During the ensuing three-hour hike and climb, which Pearl climbs on her own with a well-tied Steven on her back, she explains how, as leader, Rose was forced to keep secrets for the good of the team — with Pearl as her only confidant, telling her secrets she shared with no one else. One of these secrets was Rose's armory...

...which is why Pearl is a bit stunned when it turns out that Steven has already been there, and knows how to operate it perfectly. However, the sword is still nowhere to be found, at least until Pearl produces a hologram, and Steven realizes he knows exactly where it is: Lion.

Steven demonstrates to the Gems how Lion has a pocket dimension in his mane, one which he currently uses to store his stuff in, as did his mother. While Garnet and Amethyst handle the news well — it's a bit obvious in retrospect, after all — Pearl goes into violent denial at the thought that there was apparently a secret which Rose never shared with her. Garnet tries to reassure her teammate, as does Steven, explaining that he's sure Rose just wanted to protect her.

Pearl: How would you know? YOU NEVER EVEN MET HER!

Pearl warps away in tears, leaving all three of her friends upset. Receiving no comfort from Garnet, Steven takes off on Lion's back to track Pearl down, and finds himself back at the strawberry fields. He calls out for the Gem, but she flees, screaming to keep Lion away from her. Steven complies, continuing on foot, even as Pearl takes a dangerous path across floating land masses. He struggles to keep up, calling after her, but she never turns back, not once.

Advertisement:
Steven: PEARL! Did I– did I do something wrong?!

He makes the final jump, one that ultimately proves too far from him, and to Pearl's horror, begins to plummet. Luckily, he manages to grab onto some vines. However, seeing Steven dangling precariously from the roots at the bottom, Pearl makes no move to help him, forcing the boy to climb up on his own. When he reaches the top, he finds Pearl sobbing silently but heavily, clutching the pink scabbard to her chest.

As Steven approaches, Pearl remarks on how similar he is to Rose, how she wonders if he has any of her memories. Then she summons a hologram of Rose and reenacts the exact conversation she had with his mother thousands of years ago before the fateful battle. Rose offers Pearl a last chance to walk out the battle, explained that they will likely die, and even if they succeed, they will never be allowed to return home. The devoted Pearl rejects the offer to return to their home planet, saying that it will mean nothing if she's not at Rose's side...

...and now, five thousand years later, Pearl is still here on Earth, while Rose is gone.

Pearl: Everything I did, I did for her. Now she's gone, but I'm still here...

Still dejected, Pearl wonders what Rose would think if she saw her now. To her surprise, however, Steven simply wraps her in a fierce hug and says, "Well, I think you're pretty great," and Pearl bursts into tears.

The pair spend the rest of the night together, Steven at first entertaining her with magic tricks from Lion's mane, before producing Rose's flag, the sight of which causes Pearl to react with deep regard. Pearl regales Steven with stories of their battles and victories, and then, in silence, the two ride Lion back home, the screen fading to black.

The Crystal Gems stand in a way that matches up with the shot of the star on the Crystal Temple's door in the next scene.

The Crystal Gems stand in a way that matches up with the shot of the star on the Crystal Temple's door in the next scene.