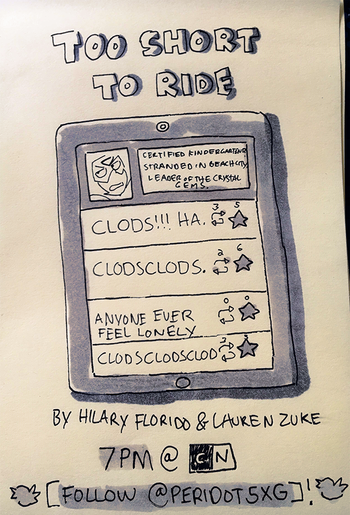 Steven gives Peridot a tablet as a gift, meant to replace her old finger screen. He explains that she can hang out on the world-wide web using the tablet and introduces her to a website where she can document her thoughts, just like her logs. Peridot takes the velcro off a pair of Steven's old shoes and sticks them on her tablet and around her arm so the tablet can be attached to her.

Amethyst enters and takes a moment to call Peridot a square for having a tablet stuck to her. She and Steven had been planning to spend more time with Peridot, and they head to Beach City Funland together.

The 'Shorty Squad' go to the House of Mirrors, and Steven and Amethyst enjoy shapeshifting so they appear as they normally do in the mirrors, but Peridot doesn't seem so happy.

Later, while among the carnival games, Peridot spots a large plush alien at the ring toss booth, and Steven explains how to win it: toss rings so they land around the necks of the lined-up bottles. The three are unable to land any rings until Amethyst cheats by shapeshifting a longer arm and dropping a ring around a bottle. Instead of receiving the giant plush, Peridot gets a finger-sized alien toy; to win the large prize, they must land ten rings on the bottles.

Amethyst, Peridot, and Steven eat corn dogs while sitting on a bench. Peridot grouchily tweets on her tablet, saying Funland should be called Shapeshifter-land. After some goading, she admits that she can't actually shapeshift, and Steven and Amethyst try to help her learn to use her powers. When their attempts don't help, Peridot explains the real reason she doesn't have powers: Homeworld is low on resources and have stopped creating Gems with standard Gem abilities. Peridot is an Era 2 Gem who was given technology to make up for the lack.

Amethyst gives a heartfelt talk to Peridot: Peridot isn't having fun because she's focusing on what she could've been rather than accepting herself as she is. Peridot ignores Amethyst's encouragement, still frustrated and engrossed in her tablet. Annoyed, Amethyst takes the tablet and throws it towards the ocean. A horrified Peridot reaches out, and to everyone's surprise, she's able to use her newly-discovered ferrokinesis to keep her tablet from landing in the water and shakily bring it back to her.

Steven is excited for Peridot — there are so many uses for her newfound ability. The first thing she does is go back to the ring toss booth and use her powers to move ten rings onto the bottles, winning her the plush alien.

Iris Out on Steven, Amethyst, and Peridot.