Video Game / Save The Light 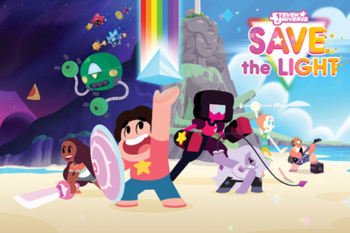 Steven Universe: Save the Light is the sequel to the Steven Universe mobile game Attack The Light, taking place during the show's fourth season.

In September 2019, another sequel titled Unleash The Light was unveiled by Apple as part of their Apple Arcade service for iOS, iPadOS, macOS, and tvOS, and was released on November 27th, 2019.