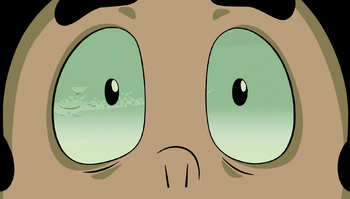 As his dream on Watermelon Island fades, Garnet's words are still with Steven as he returns to wakefulness.

Garnet: And Steven...we love you.

Steven awakens to more tremors. Peridot's blackboard drawing with the BYE BYE EARTH drawing on it nearly falls on him. He shoves it aside and breaks the news to Peridot that the Gems have no quick way back to them, so the two of them must drill and stop the Cluster themselves. Peridot is already atop the Drill ready to board it, as Steven climbs to join her. She expresses frustration that there's no teamwork since the Crystal Gems went to fight Malachite instead of handling the literally earth-threatening threat. But since all she has is Steven, she's ready to make the most of it. Sort of.

They board the drill and begin drilling on the spot. Steven braces for impact but Peridot informs him it will be 2 hours before they get to the Cluster. Steven admits he didn't realize it would take that long and wishes he'd brought some tunes. Peridot took that into consideration and turns on some elevator music. Steven realizes how tiny the cockpit is and wonders aloud how Peridot expected all the Crystal Gems would have fit in the ship in the first place. She says they would have had to shrink or something; she didn't really have time to plan.

As they enter the mantle of the earth, Peridot clarifies for Steven the difference between lava and the superheated Peridotite that currently surrounds them. They briefly discuss that Peridot was made on Homeworld. Steven asks her about it. She describes she has no memory of it, only feelings. She admits that she knows she can never return to Homeworld, but she can't help having feelings. She tells Steven she has something different now – the Crystal Gems and him.

They don't get the opportunity to explore Peridot's feelings further as the ship is attacked by Gem Mutant experiments. Peridot proudly deploys the cannon, smirking that she put it in even though Pearl didn't think it was necessary. Steven begins firing on them as directed but stops saying it doesn't feel right.

Peridot: Then use the D-Pad.

Steven explains he means that it isn't right to destroy them; that they'll just form again later. He complains that he can't bubble them to keep them safe, and tells Peridot that they should be trying to help the gem mutants.

Peridot: We can't help them. They're too broken. The beings who used to be in those shards are so shattered, they don't know who they are or what's happening around them. They just seek out out other gems, looking for the missing parts of themselves, trying to become whole.

They hit denser rock and drill down until they reach an enormous cavern. The cavern trembles, and Peridot cries out that they're too late; the Cluster is taking form. She apologizes to Steven, telling him she's sorry she couldn't save him or the billions of other life forms that matter far, far less to her. She asks if he has any last words.

Steven: I love you, Peridot.
Peridot: (genuinely touched) Wow, thanks.

But the Cluster is not succcessful in forming on its first try. Peridot realizes this means they have a chance, and tries again. Steven thinks they shouldn't hurt the Cluster and points out he doesn't think it knows what it's doing.

Peridot: It doesn't matter if it knows what it's doing. It's still going to do it.

As Peridot increases the attack, deploying two more drill heads, Steven begins sweating and crying out in pain. She pauses to ask if Steven is all right, and he encourages her to continue. One drill head is destroyed, but Peridot continues to press the attack. From Steven's point of view, the floor begins to flash out from under him. Pained ghost faces assault his vision. His gem begins to glow. Peridot's concerned voice fades from him, and he wakes up floating in a black void lit by distant tiny pinpoints.

Steven asks what they have to, need to, and the thunderous reply in billions of anguished voices and a blast of blinding light is: FORM!

Steven asks them to stop, but they continue to cry out until he gets them to remain calm. He introduces two shards to each other, so they can speak to each other. As they ponder this, Steven explains that if they form they will destroy the earth.

The Cluster shards recoil from this information, each saying “No...” in a dismayed voice, but begin crying out that they can't stop and are going to form. In desperation, Steven tries to bubble the shards. He manages five, but realizes there are so many – too many. He apologetically tells the Cluster he can't do it all on his own.

His dream ends, and waking, Steven excitedly explains to Peridot that the cluster doesn't want to form at the expense of the earth. He explains that bubbling them will stop it. Peridot can't imagine bubbling such a huge number of gem shards. Steven, dismayed, is frustrated at the situation until he realizes the gem shards learned from his communication with them in their shared dream. One shard bubbles another, and another, leading to a chain reaction that culminates in the entire Cluster bubbling itself, even if they don't move from the center of the earth.

Some time later, Peridot and Steven bring the drill back to the surface, and fall from the now-broken machine. The Gems return not long after with Lapis and ask if they stopped the Cluster.

Steven explains he talked to it and it's okay now because the Cluster is in a bubble.

Pearl: How on earth did you manage to bubble that?!
Steven: We had a little help.

The shot changes to the center of the earth where the Cluster rests, in a bubble, quiet and no longer threatening.