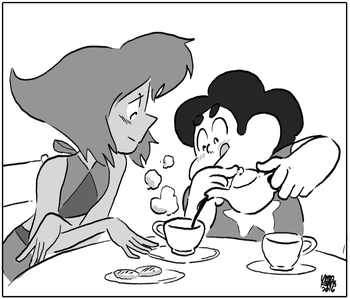 A little bit of time has passed since the Crystal Gems' adventure on Mask Island and Peridot and Steven's journey to the center of the earth. Not enough that the hole has been filled in. But Peridot is regaling the Gems with her description of their trip down to the Cluster. She makes it sound full of action, and sort of mocks Steven talking about his feelings. Peridot describes Steven passing out on her, then semi-sheepishly turns the story over to him.

Peridot: Then everything started glowing and well, yeah...wait. I'm sure Steven can fill you in on the rest, since he's the one who saved us. Right, Steven? Tell 'em what happened in there!

But Steven's attention isn't really on the story. He's too concerned about the still-unconscious Lapis Lazuli and runs to check on her. She's in the barn, sleeping fitfully. Garnet follows and acknowledges Steven's worry. Steven recalls from his dream with her that she was fighting so hard to keep Malachite from escaping.

Garnet acknowledges how hard that must have been for her on mental, emotional and physical levels. She informs Steven that Lapis will need a lot of time to recover from the ordeal. Steven accepts that, and goes back with Garnet when she says that she wants to hear more about what happened underground.

Several hours later, it is night and Steven wakes from sleeping in his cozy caterpillar sleeping bag. He gets up to check on Lapis who is up and around again. He's delighted to see it, for the second it takes him to realize she's already got her water wings up and is planning to leave again.

Lapis informs him she has to go. She doesn't belong on earth with the Crystal Gems and never has. Steven assures her he understands, but that he wishes they could hang out more.

Steven: I feel like I only get to see you when there's something horrible going on.

Lapis is charmed by Steven's gentle wish to spend time with her, but she thanks him and wishes him goodbye, taking off into the night.

A day or so later, Steven and the Gems are preparing to return home to the temple. Peridot has chosen to remain at the barn, rather than returning to live in the bathroom. She admits she's accustomed to the barn and really should fix the hole she made with her giant robot. Steven accepts that and gets ready to get in his dad's van with the Crystal Gems. Greg is relieved as the van is so packed that Peridot probably wouldn't have fit. Steven tells them he'll be along later, choosing to travel via Lion.

He walks around the barn calling for Lion, but the cat is nowhere to be found. But Steven reaches the silo and finds Lapis sitting thoughtfully atop it. He climbs to the precarious dome and greets her. She explains the only reason she's here again is that she left only to realize she has nowhere to go. She can't go back to Homeworld after what she did to Jasper, and she can't stay on Earth.

Steven tells her of course she can stay on Earth. He explains that she can live anywhere on the planet. He begins naming all the places he knows off the top of his head and offers to help her find a new place to live, using the GPS on his phone. She takes him piggyback and flies off.

They look at the countryside and forest. He teaches her what leaves are and explains to her about the change of seasons. Lapis is unsure and Steven points her in another direction.

They reach Empire City. Steven describes a sitcom lifestyle to her. They go on to Jersey, where Steven informs her the people there don't seem to like the Earth any more than Lapis does.

They fly above the clouds and Lapis, becoming a little more lighthearted as she does tricks for Steven. Steven realizes how far out they are and sees the Galaxy Warp. Lapis is stunned by the sight and nearly drops Steven, apologizes, and lands. She explains why the sight evoked such a reaction from her; it is the place where she was abandoned.

As Lapis describes what happened to her, the water from the ocean floods in and becomes a place for her to project her memories. She got caught in a fight between Homeworld and the rebels. A gem with long dreadlocks hit her hard enough to reduce her back to gem form. The Homeworld gems, mistaking her for a Crystal Gem rebel, embedded her in a mirror and tried to use her to obtain information about the rebellion. Since Lapis wasn't a rebel, she had no information to give. Trapped in mirror form, she had no way to speak up and let them know they were mistaken. Thus it went, with them demanding answers of her she couldn't give until the tide against Homeworld was turned. The Homeworld gems fled, dropping the useless mirror. Someone stepped on her and cracked her gem, leaving her within sight of the Galaxy Warp but unable to reach it. There she stayed, for millennia until Pearl found her.

After telling her tale, Steven asks if Lapis doesn't need a moment, but she insists that she just wants to get away from the place that holds such a bad memory for her. As they return to the barn, she confesses that she still feels trapped.

Steven assures her that she's not. She's not underwater or in a mirror anymore. Lapis insists she's still on Earth. Steven counters that nothing is still on Earth; things are always changing.

Steven: The leaves. The city. Even Jersey changes. My dad says the rest stops used to be pretty gross. But now they have sushi!

Steven goes on to tell her it's not the same world that held her prisoner, but that maybe someday Earth can feel like home. He lets her know that this time she'll be making a choice.

Lapis realizes that for all the time she has spent on Earth, she has not really seen much of it. As such, she decides she will stay at the barn.

Steven excitedly asks if she really means “here-here”. When she confirms that she does, Peridot joins the conversation.

Peridot: Yes, hear-hear everybody. What are we talking about? Lazuli. Nice to see you up and about.

Lapis is less than thrilled to see Peridot and demands to know what she's doing there. Peridot explains the barn is her home away from Homeworld.

Iris Out on a suddenly awkward Steven who hadn't thought this far ahead.