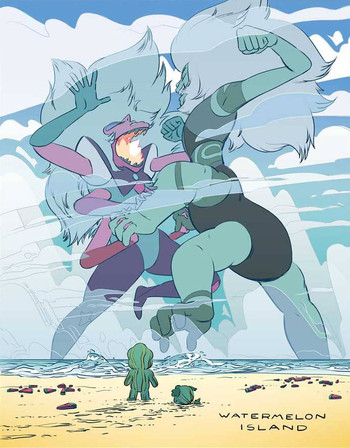 A Watermelon Steven opens its eyes, who seems a little confused. He gets up as there's a little tremor and begins to wander the island, finding a watermelon puppy on the way. Before long the Watermelon Steven has made his way back to the village. It's a small but thriving community, where everyone has a job from working the gardens to tending the watermelon chickens. A watermelon horse pulls a cart, where new watermelon babies have been harvested. He delivers one to a pair of Watermelon Steven people, who excitedly greet their new child.

The idyllic scene is interrupted by another tremor and a harsh noise. A Watermelon Steven is banging a gong. This turns out to be a summons to the entire community, as they all gather in a clearing around one of their own who appears to be a wise man or shamanic figure. The Watermelon Steven who is exploring follows them to see what's going on, only to watch in bewilderment as they all engage in a round of “nose goes”. The Watermelon Steven was so fascinated he didn't touch his own nose, so is treated like a volunteer. He is adorned with a flower crown and painted with Steven Universe's star on his chest, then carried with great ceremony via palanquin to the edge of a cliff – and left there.

The Watermelon Steven looks back at the rest of the villagers, who mime to him the position he should take. He follows their lead and turns back to the cliff's edge which overlooks the sea. Another tremor shakes the island. From the waves rises the enormous head and shoulders of Malachite, still in Lapis' chains, who opens her eyes, looks down on the cliff, and recognizes... “Steven.”

As she bites down on the Watermelon Steven, the real Steven Universe wakes in alarm as another tremor goes off. A frantic Peridot cries out that this is a sign of the Cluster being close to emerging. She points out how fast the tremors will progress, and that they don't have long before the earth is completely destroyed.

Steven describes the dream he had and that he saw Malachite. Garnet realizes this must mean Lapis is losing control and that the dangerous fusion will soon be loose. They recognize the threat of destruction and harm that the unstable fusion could cause.

The Gems decide to take on Malachite first and head for the nearest Warp Pad without Steven; Garnet has declared this mission too dangerous for him, much to his dismay. Peridot only just now finding out about Malachite and is astonished that Lapis has trapped Jasper in a fusion. When Steven complains the Gems said it was too dangerous, Peridot suggests he just disobey them and rebel.

Peridot: I mean, isn't that you guys' thing?

Steven gleefully realizes that using his dream power will allow him to be present for the fight but still remain safe as his body is still beside the barn. He immediately lies down to go back to sleep, much to the dismay of Peridot who is now all alone for the first time in a while.

Steven, now possessing another of his Watermelon creations, rushes to see what's going on. The Gems are on the shore, and perform their Fusion Dance to become Alexandrite. Lapis Lazuli notices their presence, as does Jasper, who is so eager for revenge that she manages to pull free of Lapis' water chains. Alexandrite tries to make a non-violent go of it, suggesting they don't have to fight. But Malachite, with Jasper in control of the fusion, eagerly joins battle with them, saying she was wrong about Fusion just being a cheap thrill.

The fight starts out almost even, but quickly begins to take its toll on Alexandrite. Before long Lapis' water powers and Jasper's brutality turn the tide, and she is able to get Alexandrite on her back.

Steven rushes to the cave where the Watermelon community has taken shelter, and gives them a Rousing Speech. The shaman agrees, and the majority of the community runs off to battle, save for the ones with children.

Malachite is gloating over being about to defeat the Gems when suddenly she is assaulted from behind. The Watermelon people are firing on her with arrows, rocks, and catapults. Some of them are even coming at her in the air from gliders. They swarm her. They're not much of a threat, but they distract her into swatting them off and smashing them. It's enough to loosen the grip of the water grasp she has on Alexandrite. Alexandrite frees herself, smacks Malachite with Sugilite's flail, hits her into the sky with Sardonyx's warhammer, and finally produces Opal's bow.

Alexandrite: You two should spend some time apart.

The energy arrow carries the essence and intent of all three Crystal Gems. When it hits, Malachite is forcibly fissioned from the fusion. Jasper and Lapis Lazuli fall from the sky, unconscious and unable to save themselves. Alexandrite catches them, then unfuses as well; the Crystal Gems are exhausted, Amethyst barely even able to move.

Watermelon Steven runs up to greet the Gems, happy for their victory. Pearl asks if that's really Steven. Garnet acknowledges him and thanks him for not only coming, but for rallying the Watermelon people. She then directs her thanks at all of the villagers, bowing in respect and appreciation for their assistance. Despite their losses, the Watermelon Islanders are blushingly appreciative of the praise. Relieved the fight is over, everyone begins to laugh...

Suddenly, there's suddenly an earthquake! The Islanders clutch each other in alarm as a fissure cracks open, slanting the island's land toward it and throwing everyone off balance. The unconscious Homeworld gems begin sliding toward it. Amethyst grabs hold of Lapis and Pearl makes a dive for Jasper, but misses. The enormous Homeworld gem falls into a crack and vanishes. Garnet immediately acknowledges the threat of the Cluster and tells Steven he and Peridot must handle it alone, as the Warp Pad got destroyed in the fight so there's no way for them to make it back to the drill in time to help.

Steven is terrified of trying such a huge undertaking without his family beside him, but they assure him they know he can do it. As Steven acknowledges his duty and begins to leave the Watermelon Islander and return to his own body, the Gems' words of encouragement follow him.

Amethyst: You got this, dude! You know the drill!
Pearl: Stay safe. Watch each other's backs.
Garnet: And Steven...we love you.

We Iris Out in Slow Motion on the trio.

(FYI: It's not clear what he's actually saying, but it fires them up anyway.)

(FYI: It's not clear what he's actually saying, but it fires them up anyway.)