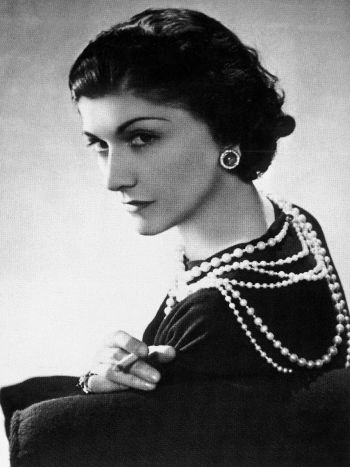 “In order to be irreplaceable one must always be different.”
Advertisement:

Gabrielle Bonheur "Coco" Chanel (19 August 1883 - 10 January 1971) was a French haute couture Fashion Designer. Her innovative creations shaped fashion in The 20th Century and is one of the main contributors that liberated women's fashion, alongside creating the eponymous fashion brand renowned and distributed worldwide.

Chanel was born from a poor family, the second child of six, where her mother was laundering and her father was always "travelling" around France selling goods for the family. After her mother died, she was sent to a convent, along with her sisters. At the age of twelve, she learned sewing and other things from the nuns that would inspire her late life. After working as a seamstress and moonlighting as a stage singer, she opened a hat shop in 1910 in Paris and sportswear shop in 1913 in Deauville that was immediately adored by her early patrons for her innovation. By the time World War I ended, and her notoriety well-known in France, she opened her first couture house at 31 Rue Cambon in Paris in 1919.

The Roaring '20s was the era of her prime, being participative in women's liberation at the same time being innovative and adaptable, all the while using camellias as her Flower Motif, dating a handful of rich aristocrats like the exiled Grand Duke Dmitri of Russia, the Duke of Westminster, Etienne Balsan, Boy Capel, (of which the latter two would have a Triang Relation and a rumoured affair about Igor Stravinsky. In 1921, with the help of Ernest Beaux, a professional perfumer, she introduced the Parfum No. 5, alongside other parfums, makeup and skincare products made later. She also experimented in fabrics like jersey and tweed, both originally used in men's clothes, and in 1926, perfected the Little Black Dress. Not to mention, she popularized the loose silhouette when she borrowed a fisherman's jacket, wearing pants and cardigan, donning bobbed hair, short skirts, affordable costume jewellery, sparkly beaded dresses, and tanned skin after vacationing in Cannes. All these things shaped The Flapper as is, and leaves a lasting impact in fashion. By the time The Great Depression hit, if she was not battling with surrealist coututier Elsa Schiaparelli or famed Hollywood costumer Gilbert Adrian, she was at the height of her fame, all thanks to Hollywood patrons and actresses wearing her designs.

Unfortunately, by the time World War II came, and the Nazis invaded France, she closed shop and secluded herself on the Ritz for the rest of the war. Accused as a collaborateur from an affair with a Nazi agent, she was acquitted by the British and Americansnote Whether or not she was a Nazi spy is still a matter of controversy; her own estate denies these claims. Wikipedia has more

on the subject. and moved to Switzerland, where she left the sewing machine for good...

...for about fifteen years. By that time, Christian Dior was at his peak, with his silhouette consisting an ultrafeminine chic of long skirts, narrow shoulders, accented busts and thin waists that was considered a big break from wartime rationing. Chanel reopened her shop with a jersey suit contrasting Dior's silhouette, at the age of 70. One of the most notable outfits using her silhouette was the pink jersey ensemble worn by Jacqueline Kennedy Onassis on the day her first husband, John, died. While her collection wasn't well-received in Paris due to her wartime association, it was instantly (and ironically) well-favored by the British and Americans. All the while, despite the mixed reputation, and her distaste for miniskirts, she continued to run the business in The '60s and left it running well when it emerged as a successful fashion empire even after her death through the hands of Karl Lagerfeld from 1983 to 2019, and through Virginie Viard since 2019.

She was the only fashion designer listed among the 100 most influential people of The 20th Century according to TIME Magazine (1999).