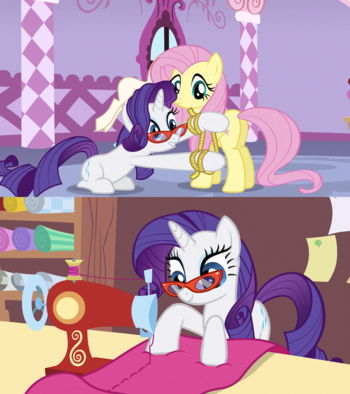 She lives for "The Art of the Dress".
Advertisement:

Often they are just as skilled at making clothes as designing them, as it would aid in knowing what outfits are even possible. Often they have other people helping make their creations, usually apprentices and hopeful apprentices. High fashion designers then may have their clothes showed all over the Fashion Shows, Fashion Magazines, and Up Marketing ads. Some designers are former models themselves.

Just as their clothes tend to be larger than life, so can these characters themselves. Often they are eccentric, vain, arrogant, bossy, drama queens, or some combination of those.

If designers are male they are more than likely to be homosexual or bisexual. This is partly due to some designers in Real Life being gay, and partly because Men Are Tough and there is the perception that Textile Work Is Feminine. Though they can be straight when Real Men Wear Pink.

A work can even invoke this among the audience if there Official Fan-Submitted Content involving clothes.

Some video games simulate this (even if technical limitations, such as No Flow in CGI, make them Virtual Paper Doll games with extra features).

A Sub-Trope of The Fashionista. A Super-Trope to Eccentric Fashion Designer. A Sister Trope to Fashion Model. Compare Rule of Glamorous, The Beautiful Elite, Unlimited Wardrobe.