Fanfic / The World is Filled with Monsters 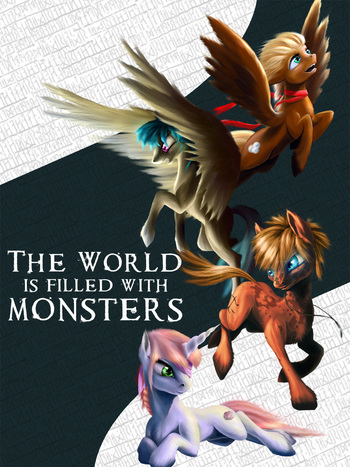 The World is Filled with Monsters

is a My Little Pony: Friendship Is Magic fanfiction by Cold-in-Gardez, set over a thousand years before the show's time and before Luna's fall and transformation into Nightmare Moon. It follows Vermillion, an earth pony soldier in the Equestrian army, whose force is sent to the frontier settlement of Hollow Shades to relieve a distress call only for it to be overrun and destroyed by a horde of Giant Spiders. This is only the first sign of a larger disaster, as ancient creatures of the wilderness begin to stir and besiege the edges of civilization.

While Equestria as a whole opts to batten its hatches and defend its borders, Vermillion and a small group of soldiers from his old unit are chosen by Luna to strike back against the monsters and defend the small settlements beyond Equestria's frontier, as she believes that simply waiting out the tide of darkness will allow it to grow too strong for even Equestria's collective strength to hold back. Things slowly begin to grow far more complicated than this, however, as Luna seems to have less than selfless motives behind the whole enterprise, and not all monsters lurk in the woods...

The story is set in the same universe as an earlier work by author, Lost Cities. Notably, two cities originally depicted as abandoned ruins there — the pegasus fortress-city of Derecho and the Equestrian capital of Everfree — are still inhabited during the time of The World is Filled With Monsters.