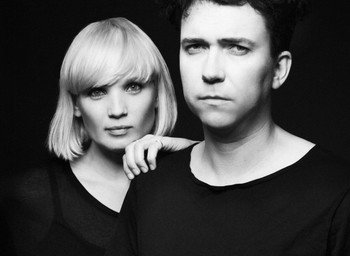 The Raveonettes are an indie rock/Noise Pop duo from Denmark, consisting of Sune Rose Wagner and Sharin Foo. The two met in 2001 through mutual friends in Copenhagen, and formed the band soon after. They released their first EP the following year, and their first full length album the year after that.

Their sound is influenced by bands such as The Velvet Underground and The Jesus and Mary Chain, and is distinguished by their close two-part harmonies, hard-edged electric guitar and an overlay of distortion and noise. They have always done well in Denmark, their albums almost always reaching a Top 10 position in the national charts, but have found true success elsewhere hard to come by, and have never broken into the Top 100 in the US.

The Raveonettes show examples of: