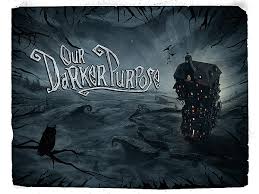 Our Darker Purpose is an Action Roguelike, developed by Avidly Wild Games and released on January 29th, 2014 for PC on Steam.
Advertisement:

It takes place in the Edgewood Home for Lost Children. As creepy as the place is, things get worse when the teachers vanish, leaving the children in charge. Things go extremely badly as the children divide into violent gangs fighting one another and the various horrors of Edgewood, all overseen by mysterious (and extremely mean-spirited) Administrators.

The game follows Cordy, a shy girl who survived the initial slaughter by hiding under a bookcase, and is attempting to make her way up the building. While inspired by The Binding of Isaac, it adds RPG elements — both short-term (experience points) and long-term (every run, even failed ones — and there will be many failed ones — provides credits to give Cordy new abilities), and detailed journal entries on Cordy's past and various foes.

The game also features a Show Within a Show in the form of the Shuddering Jim books you can find. There are enough tropes in those to warrant their separate section.

Tropes within the Shuddering Jim series: