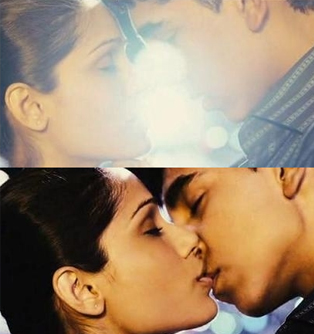 The sun is setting. Two character gaze longingly into each other's eyes. The camera shifts to a profiled two shot, with the setting sun shimmering between them in the background. Their faces now silhouettes, the characters move closer, slowly covering the sun until at last... their lips meet.

A fairly common kiss, combining the power of the sun with the Power of Love. Variations include kissing in front of the moon or some other light source, or holding each other without kissing. Expect lots and lots of Lens Flare.

Interesting note: From a lighting standpoint, when the actors are backlit their faces are obscured or silhouetted. Once they kiss, they block out the light coming through, meaning the camera can finally see their faces. A kiss turning shadows into people... There's something symbolic in that.