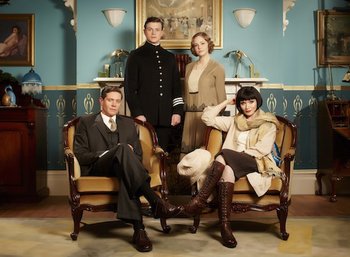 Miss Fisher's Murder Mysteries is an Australian television drama series, first broadcast on The ABC in February 2012. The series is based on author Kerry Greenwood's Phryne Fisher murder mystery novels and was created by Deb Cox and Fiona Eagger. Miss Fisher's Murder Mysteries revolves around the personal and professional life of Phryne Fisher (played by Essie Davis), a glamorous private detective in 1920s Melbourne.

Three series were produced for television, with the third airing in 2015. A film adaptation, Miss Fisher and the Crypt of Tears, was released in February 2020.

A Chinese Remake set in the Shanghai Bund, Miss S, began in 2020.