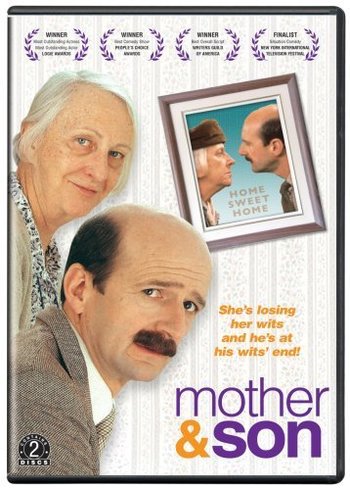 Mother & Son is an Australian sitcom that aired on The ABC from 1984 to 1994, created by Geoffrey Atherden. The series revolved around Maggie Beare (Ruth Cracknell), a retired widowed nurse in the early stages of dementia, now being taken care of by her recently divorced son Arthur (Garry McDonald). However, despite being increasingly forgetful, Maggie is lucid enough to manipulate Arthur when she wants to, usually for something devilish that will seriously inconvenience him. The other main characters were Arthur's older brother Robert (Henri Szeps), and Robert's long-suffering wife Liz (Judy Morris).
Advertisement:

The plot of the show addresses the problems of ageing and caring for somebody with increasing memory loss, with an often sharp-edged humour which carried with it a tinge of sadness. Maggie and Arthur's relationship was presented with a fascinating complexity - Maggie's cruel attacks on and emotional manipulation of Arthur disguised her deep dependence on and need of him, and Arthur's dutiful love of Maggie was constantly in conflict with his guilty frustration at the huge limitations for his own life which looking after his mother entailed. The performance of Cracknell, a famous stage actress, as Maggie was particularly lauded as one of the finest characterisations on Australian television.