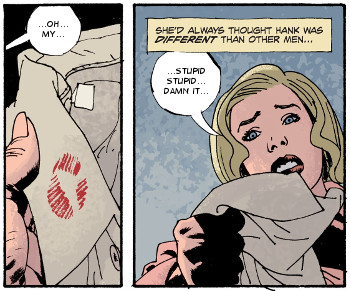 Lipstick on the collar, a telltale giveaway that he is cheating. This old trope has its roots in the days when most men wore shirts with collars and women wore lipstick that marked easily. The wife, doing her husband's laundry, finds a pink mark on her husbands collar and immediately concludes that he has a mistress. When the husband returns from work, he finds that he has been Exiled to the Couch or his belongings thrown outside. Most of the time in comedies it's Not What It Looks Like. The stain is ketchup, or the lipstick is from his grandmother pecking him on the cheek.

See also Affair Hair and Affair Letters for other types of evidence of affairs. For the variation not related to infidelity, see Covered in Kisses.

In a case of Reality Is Unrealistic, the lipstick marks are generally shown in visual media as a clear impression of a woman's lips on one of the points of the collar. In real life, the mark is more likely to be a smear or smudge near or along the top edge, unless she was deliberately marking his shirt as a challenge to the wife.