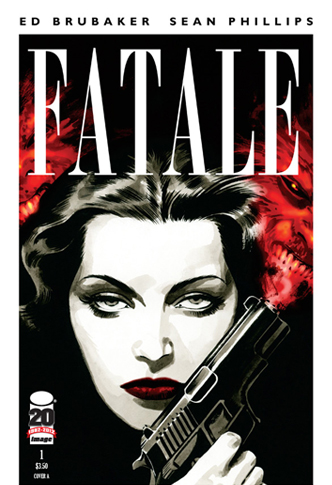 One look in her eyes is all it takes.
Advertisement:

You know the character. She's the beautiful lady with the mysterious past and plenty of secrets dressed all in black, who seems so vulnerable on the surface, like she just needs a strong man to protect her from all the creeps and lowlifes she's somehow gotten embroiled with. A strong man like you, maybe. And before you know it, one look into those deep eyes later and you're hers, and there's nothing you can do about it, and you'll do anything for her — no matter how vicious or corrupt or vile, no matter how low you have to sink. And before you know it, your life's in ruins, there's corpses piling up all around you, and you're sunk into a moral quagmire from which there seems to be no escape... all because of her.

And even then, you'd still do anything for her, just for a smile or a kiss or a touch. It's like she owns your soul. It's almost supernatural.

Only... what if it actually was supernatural?

Fatale is a comic book series by Ed Brubaker and Sean Phillips which merges the Hardboiled Film Noir stylings of their previous work with Lovecraftian overtones. Spanning a timeframe from the 1930s to the present, it centres around a mysterious woman, Josephine, who appears eternally young throughout the story and seems to have a magnetic pull on any man who crosses her path and links to the underworld — only not just the underworld of Dirty Cops and hoodlums, but also one of mad cults and Eldritch Abominations...