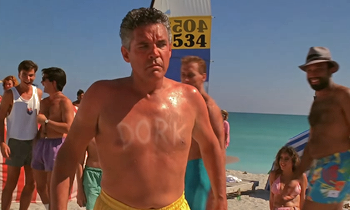 In a Beach Episode, characters can play a prank by outlining words or shapes on a sunbathing target so that when the Tan Lines develop, said words or shapes are displayed on the body. As with Face Doodling, it's usually done when the victim is sleeping. Alternatively, this may happen accidentally.