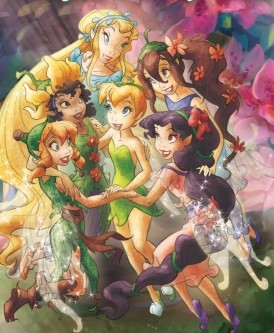 Disney Fairies is a book series written by Gail Carson Levine (of Ella Enchanted fame) and published by Disney. They're based on Peter Pan.

Additionally there are more than 40 smaller chapter books, whose canon generally discard Quest for the Wand and Quest for Never Land

The series launched in 2005 and has since become a multimedia franchise, It has a series of animated films loosely based on them; the film Adapted Out most of the cast and replaced them with new fairies.