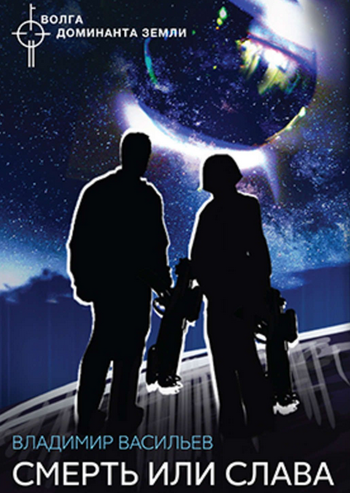 Death or Glory (Смерть или слава, Smyert' ili slava) is a science fiction series by the Russian sci-fi and fantasy author Vladimir Vasilyev. The series if composed of four novels, although not all of them are directly connected, merely taking place in the same 'verse at different time periods.
Advertisement:

In the first eponymous novel (1998), humanity finally manages to reach the stars, only to discover that the races of the great Alliance (the reptilian Svaigh, the avian Aczanny and Zoopht, the insectoid Swarm, and the crystalline Ayeshi) couldn't care less about some backward race of over-evolved apes. Despite this, humans manage to colonize several worlds, although the core worlds, including Earth, are overpopulated and polluted, while the more recently settled planets are full of adventurers and criminals, similar to The Wild West.The novel is set on one such border world called Volga. The planet's main industry is mining (mainly done by robots), and mine owners frequently have to defend their property from rivals and criminals themselves. Sure, the planet has authorities and the police, but a person's best defense is his or her own trusty blaster. Then the main character finds a strange box with a Big Red Button on it. After a few days, he decides to push it. Nothing seems to happen at first, but then a huge starship of unknown design appears over the planet. The ship attracts the attention of both the Alliance and its extragalactic enemies the Imperishables. The Alliance manages, with surprisingly difficulty, to capture Volga's population and use it to try to operate the ship, since its controls (in the form of pods with a contact interface) are geared towards humans. The humans manage to take control and escape in the ship, after destroying chunks of both armadas and vaporizing the planet. While in flight, conflicts arise between the miners and the the former planetary (corrupt) authorities for the control of the ship (which they name the Volga after their destroyed planet). After a brief period of fighting, the miners win and send a message to the Alliance. Once representatives arrive, the aliens are forced to admit that humanity has potential and offer humans full Alliance membership, provided the Volga helps them defeat the Imperishables.

The Black Relay Race (Чёрная эстафета, Chyornaya estafeta; 1999) takes place a few decades later but features none of the characters from the first novel. It involves a job to deliver strange cargo to another planet in return for a huge payout. But misfortune appears to follow anyone associated with the mysterious cargo. And it remains unclear if anyone will be left to claim the prize.

The third and fourth novels are part of a Story Arc called The War for Mobility (Война за мобильность, Voyna za mobil'nost') and take place about 200 years after the first novel. The Legacy of Giants (Наследие исполинов, Naslediye ispolinov; 2002) was inspired by David Brin's Startide Rising and features a similar premise. A human scout ship makes a chance discovery that results in it being the target by a powerful empire and sparks an interstellar war. The Shat-Tsurs, a race of former slaves of one of the Alliance races, who have been secretly building up an armada for many years, strikes out at their former oppressors and declares war on the Alliance. The scout ship's crew has to run and hide to keep their discovery from the enemy hands. They land on a nearly-uninhabited world with only a tourist base being the only human presence on the planet. The crew ends up joining a group of tourists and rangers on a jungle safari to try to survive as the massive Shat-Tsur armada arrives to claim the knowledge.

No One but Us (Никто кроме нас, Nikto krome nas; 2005) takes place a few years later. The war with the Shat-Tsur Empire continues, and humanity is the only Alliance race capable of putting up any serious resistance, especially in ground engagements. The only hope for the Alliance lies in the ancient secret from the previous novel, which may allow entire fleets to be transported halfway across the galaxy in the blink of an eye. The side with this power would undoubtedly win the war.

While no official English translations exist (there was an abortive attempt by a publisher years ago), there is a fan translation of the first novel available here