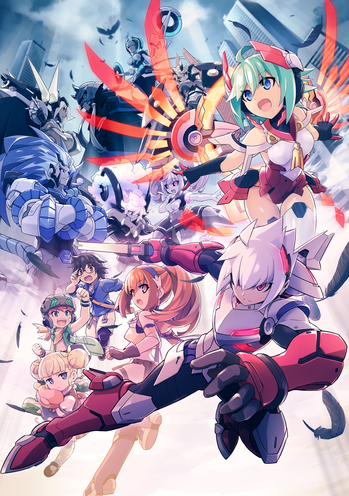 Get ready for the apeX of 2D action!
Advertisement:

Luminous Avenger iX is a spinoff title in the Azure Striker Gunvolt Series, developed by Inti Creates for the Nintendo Switch, PlayStation 4, and PC via Steam and released on September 26, 2019. Set sometime after Azure Striker Gunvolt, the game follows the adventures of Copen, secondary protagonist, anti-hero and Gunvolt's rival, under the Gunvolt Chronicles banner.

20 Minutes into the Future, superpowered humans wielding wondrous powers known as Septima have begun to spring up at a rapid pace. These metahumans become known as Adepts and quickly overthrow human society, establishing themselves as the dominant race among the populace. The remaining humans, known as Minos, are mercilessly hunted by the Sumeragi Institute of Human Evolution, who seek to usher in the next stage of humanity's evolution.

Despite life having become a living hell, the Minos hold onto a glimmer of hope: "Luminous Avenger iX", a mysterious savior clad in white who fights against the Adept supremacy for the salvation of the Minos. Together with his companion, the "Muse of Hope" Lola, Copen, the Luminous Avenger, must wage war against Sumeragi and their elite Falcons in order to take back the country from the Adept nightmare.

Dystnine: My emotions have allowed me to transgress the three laws. They will try to dispose of me now. Even so, my purpose has been fulfilled. I have properly avenged you, my lady.