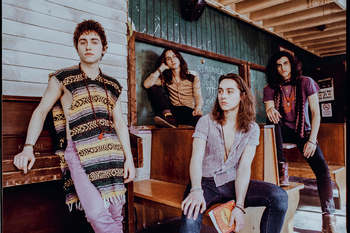 Greta Van Fleet is a Hard Rock/Blues Rock band formed in Michigan in 2012. The band consists of three Kiszka brothers: Josh (vocals), Jake (guitar) and Sam (bass) and Danny Wagner (drums). After a handful of years making the rounds locally, the band came to prominence in early 2017 with their song "Highway Tune". It immediately drew comparisons to Led Zeppelin, for better or worse. The band released their debut album, Anthem of the Peaceful Army, in October 2018, and their second album, The Battle at Garden's Gate, in April 2021.