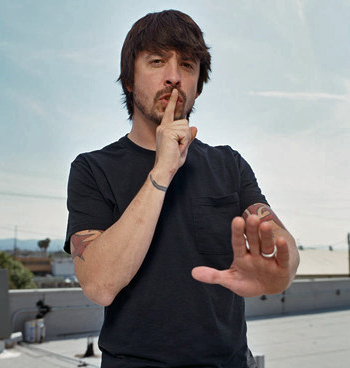 The nicest man in rock music (and also possibly the busiest.)
"A lot of nice people in rock, but he’s the nicest."
"Sometimes I get a bit unnerved by niceness because you think someone’s got an agenda, but I don’t think he’s got an agenda. And if he has, he’s playing a long game with it."
— Nick Hodgson & Ricky Wilson, from Kaiser Chiefs, describing Dave Grohl at 2011 NME Awards
Advertisement:

David Eric Grohl (born January 14, 1969) is an American rock musician and multi-instrumentalist mainly known for his work as the most famous drummer of Nirvana and the creator and frontman of Foo Fighters, but also involved with a ridiculous number of side projects.

Having spent his teenage years in hard-working but little known hardcore punk bands, Grohl's first exposure to popular attention in the world of music was as the last of several drummers for Nirvana. However, the band disbanded after the death of frontman Kurt Cobain.

Grohl, knowing his perception in the public's mind as just another drummer, decided to start his own band, Foo Fighters, and is the creative force behind their output. Almost every single sound on their first album was him, whether it was made by drums, guitar, bass or voice. He did not intend for the band to be a long-term project and is on record stating that if he'd known it was going to last, he'd have chosen a better name. Nonetheless, the band is still going strong after two decades.

Grohl is also very busy with other stuff as well; while the discography below is somewhat exaggerated, it's not joking about how much he's in demand. Certain snarkers have even joked that the Rock Band video games should be retitled "Dave Grohl Band," considering that he is or has been involved in at least six of the contributing acts (Nirvana, Foo Fighters, Queens of the Stone Age, Them Crooked Vultures, Nine Inch Nails, Tenacious D), which is more than basically everyone else on the planet. In fact, Rock Band 3 has an achievement with that very name, which you get by beating three songs on whose recording Grohl was involved.