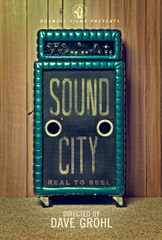 A 2013 Rockumentary by Nirvana/Foo Fighters member Dave Grohl, celebrating the life and times of a dingy Southern California recording studio that produced a metric ton of groundbreaking rock albums (and yes, Nevermind was one of them). Its secret? The studio was acoustically superb, and the (then) state-of-the-art Neve mixing console made anything recorded in there sound even better. Basically, if was an Arena Rock band from the Seventies, a Hair Metal band from the Eighties, or a Grunge band from the Nineties — if their album topped the charts, chances are it was recorded at Sound City.

Time (and the onslaught of digital technology) eventually doomed Sound City to extinction, but Grohl wrote his own happy ending: he bought the console, installed it in his own studio, then invited many of the musicians he'd interviewed to come in and make new music.

At the 2014 Grammy Awards, the soundtrack album ("Sound City: Real to Reel") won awards for "Best Compilation Soundtrack for Visual Media" and "Best Rock Song" (the Paul McCartney/Nirvana collaboration "Cut Me Some Slack").