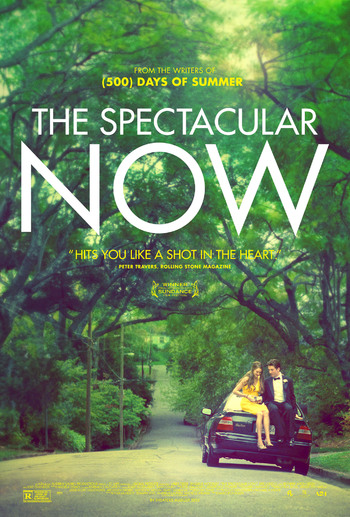 "It's fine to live in the now. But the best thing about now is that there's another one tomorrow. And I'm gonna start making them count."
—Sutter Keely
Advertisement:

A 2013 indie American film based on the novel by Tim Tharp.

Sutter Keely is a party crazy teenage boy, on the verge of graduation. His attitude is that everyone should "live in the now" and step outside their comfort zone. Things aren't going too well for him when the film begins, as he gets dumped by his girlfriend Cassidy over a misunderstanding. Things look up for him when he strikes up a romance with a shy geek girl called Aimee Finicky. Nobody Thinks It Will Work.

The film stars Miles Teller as Sutter, Shailene Woodley as Aimee, Brie Larson as Cassidy and also Jennifer Jason Leigh as Sutter's mother. It's also notable for being one of the first films released under A24.

Tropes used in the film include: