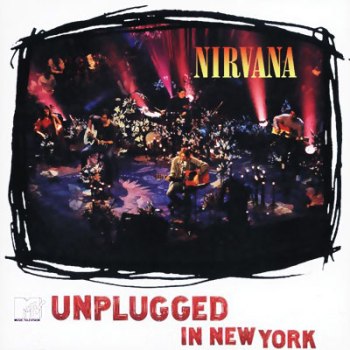 "Good evening. This is off of our first record, most people don't own it."
— Kurt Cobain
Advertisement:

MTV Unplugged in New York is a Live Album by American Alternative Rock group Nirvana, released through DGC Records on November 1, 1994. It contains perhaps the most famous concert to ever come from MTV's Unplugged series, and notably ended up being Nirvana's final concert, with "All Apologies" being the last Nirvana song Kurt Cobain played live during his lifetime.

The album was recorded on November 18, 1993 in New York and broadcast on MTV. It was also their first posthumous release, coming seven months after frontman Kurt Cobain's death, and added two bonus tracks that weren't broadcast on TV at the time.

The band chose not to perform any of their big hits, apart from "Come as You Are"; at that point, "All Apologies" and "Pennyroyal Tea" were both scheduled to be released from their then-new album, In Utero. It's also a partial Cover Album, as they performed songs by some of Cobain's musical influences and thus gave many of these artists more mainstream attention.

The album hit #1 on the Billboard 200 album chart in the United States, and the Official Charts Company album chart in the United Kingdom. It finished at #13 on the year-end Billboard 200 chart for 1995, and was in the top half of the OCC year-end chart in both 1994 and 1995. A vinyl re-release became a hot seller throughout The New '10s in the UK. It was certified eight-times Platinum by the RIAA, and triple-Platinum by the BPI. It also won Best Alternative Music Performance at the 1996 Grammy Awards, the band's only win for the award.

The live version of "About a Girl" also became a minor hit in some countries, where it was released as a single. However, the unquestioned highlight of all the covers the band played that night was their haunting closing cover, Lead Belly's "In the Pines," titled here as "Where Did You Sleep Last Night?"

The album was remastered, and re-released for its 25th anniversary on November 1, 2019. Released on CD, digital, and a double-record vinyl album, it added five rehearsal tracks.

Where Did You Trope Last Night?